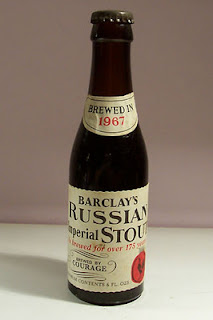 I'm in a bit of a Russian phase at the moment.  I'm just over half way through Life and Fate, Vasily Grossman's epic novel centred on the Battle of Stalingrad, which has prompted me to dig out my Russian Made Simple book which I last had a go at about twenty years ago.

Now the Russian hat trick is complete with the news that Wells and Young have brewed a new batch of Courage's Russian Imperial Stout, the strong bottle conditioned beer that was last brewed in 1993. Originally brewed at the Anchor Brewery in Southwark by Thrales and then Barclay Perkins for export by sea to the court of the Russian tsars in St Petersburg, it's a beer I've never drunk and I'm looking forward to its release next year.

Here's a description of Russian Imperial Stout by the journalist Cyril Ray who visited the cellars of the Anchor Brewery in the mid-1960's.

"The firm's visitors' bar stood me a bottle of the 1962 Russian Stout...A smooth, rich, velvety depth-charge of a drink - sweet, but with the sweetness only of the malt, for there is no added sugar, and yet with the bitter tang of hops...[and then] down to the Russian cellars to taste one or two that had been specially bottled and long matured. First the 1957, poured from a pint champagne bottle that had been corked and wired, exactly like champagne, and matured lying on its side...The cork came out with a pop, and the beer frothed creamily into the glass, dark and rich. Smoother than the 1962, I thought, but it was surpassed by the 1948 which came from a full-sized champagne bottle, smelled like burgundy and drank like liquid silk."

Let's hope Wells and Young can reach these standards.

h/t to Ron at Shut up about Barclay Perkins for reproducing the Cyril Ray piece which you can read in full here.
Posted by Matt at 10:19