I've finally got round to buying some lantern pint pots, the ten-sided, handled beer glasses that were standard in pubs throughout the thirties and forties, but stopped being manufactured some time in the sixties, until Stockport-based glassware suppliers Stephenson's started importing them a couple of years ago from China (Martyn Cornell on his Zythophile blog has a, typically thoroughly researched, history of their creation and resurrection).

I reckon this is the fifth type of pint glass I've drunk from or owned: nonics and tulips, which were standard in the late eighties and early nineties when I started drinking in pubs, conicals, which you can pick up at most beer festivals, dimpled jugs with handles, which I've got in both pint and half pint form ("borrowed" by relatives from south Manchester pubs in the sixties), and now lantern glasses, which can be seen in a Lancashire pub in this clip from the 1945 documentary Down At the Local that's included in the British Film Institute DVD Roll Out the Barrel.

I don't expect the lantern to become again the standard pint pot it once was, or as they appear to be in this advert for them, but it'd be good if they came back as a niche glass in more specialist beer houses.

As I washed and dried my new beer glasses, I thought of my grandmother, who worked as a barmaid in Threlfalls pubs in Wigan and Stretford in the thirties, and who must have done the same thousands of times. 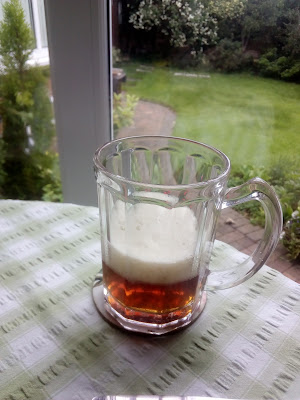 Catch-22, set on an American airbase on an island in the Mediterranean off the coast of Italy in World War II, is regularly listed amongst the greatest novels of the twentieth century which everyone should read (I first read it about thirty years, pretty much straight though in a single day). The "catch" of the titles refers to the fact that to be withdrawn from combat duty pilots and aircrew have to be diagnosed insane, but them asking to be so is taken as indicating their sanity.

As with the earlier film adaptation in the 1970s, I'm not sure that Catch-22 really translates to either the big or small screen. It's not just that the structure of the novel, with many of the early chapters focusing on the foibles and interior life of an individual character, has to be altered to fit a more linear narrative on TV, but the zaniness, transmitted in its five hundred or so pages by Heller's prose, in descriptive passages as well as dialogue, can't really be rendered either.

When you don't laugh at an adaption of a novel which almost defines "black humour", that's a problem. 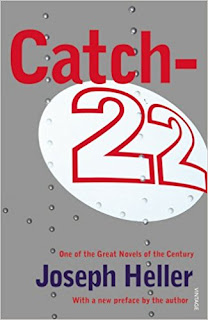