The poet laureate John Betjeman once described Ludlow as "probably the loveliest town in England". I'm not sure if he got to any of its pubs though, some of which are also right up there in the picturesqueness stakes.

I've been to Shropshire a few times before, but until yesterday hadn't been south of Shrewsbury, a similary timber-buildinged and narrow-streeted market town and the principal one in what must be amongst the emptiest counties in England.

The purpose of the trip was for my local CAMRA branch to present the silver award from Stockport Beer Festival to Ludlow Brewery for their Black Knight stout. En route there on the train, we passed both the trackside Salopian Brewery, probably the county's best-known brewer, and New Meadow, the rather identikit new home of Shrewsbury Town Football Club.

Ludlow Brewery operates out of a modernised ex-goods shed right next to the railway station, a handy location which meant that when we arrived at not long after noon the split-level structure was already filling up with several large parties. Certificate presented and a few pints of their beers and very toothsome pork pies and Scotch eggs dispensed with, we set out to explore some more of the town's other pubs .

I was quite surprised at how steep the hill we climbed up to the town centre was, although it was  worth the effort as we passed numeous mediaeval buildings, and in terms of size Ludlow is very walkable. The pubs there were also hearteningly full for a Saturday afternoon, partly because of the coach parties which had travelled to the town for a Christmas market at the castle.

Apart from the Ludlow brewery tap, the town has just one other Good Beer Guide entry, The Queens, which we visited as well as the courtyarded Feathers and Rose and Crown, the bottle shop-cum-bar Artisan Ales, the more modern but still atmospheric Church Inn, and finally the front parlour-style and single beer-dispensing Dog Hangs Well for a last pint before boarding the train for the return journey north, one enlivened at Shrewsbury by some raucous but chatty Bradford City fans celebrating their 1-0 win over the town's table-topping League One side. 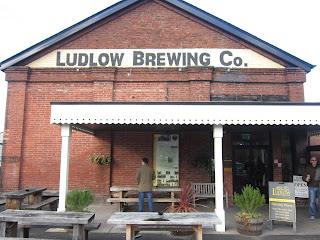 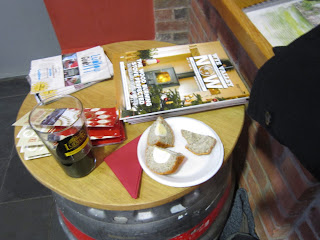 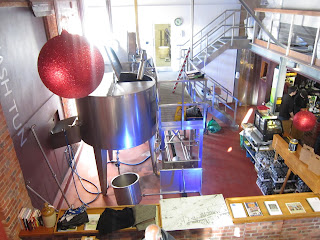 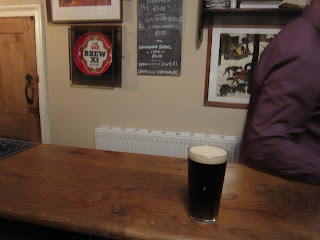 BBC Two last night showed a documentary filmed throughout the campaign for June's General Election, Labour: The Summer That Changed Everything, which followed four anti-Corbyn Labour MP's who hoped that a Tory landslide and a heavy defeat for their own party might just finish off a Leader whom they themselves had spectacularly failed to oust with an, at times farcical, parliamentary coup the summer before, ultimately fronted by the comically inept and now almost forgotten figure of Owen Smith.

The highlight of the programme for me was the moment when the exit poll was announced as voting ended at ten o'clock on polling day, showing that Labour had actually gained thirty seats, the Tories had lost their slim House of Commons majority and their hopes of Corbyn resigning had just evaporated, with Stephen Kinnock, next to his father, the failed ex-Labour Leader and now Baron of Bedwelty, Neil in a social club in South Wales and Lucy Powell amongst besuited young activists in the City Arms, long a meeting place for Manchester councillors, being just round the corner from the Town Hall, both attempting to suppress their obvious disappointment as their hopes for a swift return to what they still no doubt see as normal politics were finally dashed by the electorate.

The programme then skipped forward to the Labour Party conference in Brighton a few months later, with the four looking rather forlorn and friendless amidst the, admittedly a bit gushingly admiring, youthful Corbyn fan club. Having twice failed to persuade the membership to elect one of their own as Leader in successive years, you felt that deep down their thoughts were pretty much identical to those which Bertolt Brecht famously assigned to the Stalinist dictators of East Germany in 1953 after the Berlin building workers' strike sparked an uprising against their rule: "Would it not be easier.../To dissolve the people/And elect another?"

The most bizarre Labour Party-related TV moment of the night had already occurred earlier in the evening, when one-time Cabinet minister and Shadow Chancellor Ed Balls brought the ex-Communications Workers Union General Secretary Billy Hayes onto BBC One's Would I Lie To You?, not a programme I normally watch, but which I happened to catch five minutes of while flicking through the channels, and introduced him as his former partner in a Lionel Richie/Diana Ross karaoke tribute act. 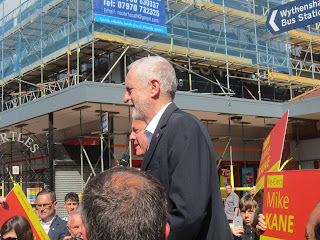