A few thoughts about Brussels

This time last year, I was in Brussels, flying back at the end of my first trip to the Belgian capital from the airport at Zaventem which on Tuesday morning was the scene of two of the three bomb attacks which struck the city.

As I suppose is natural, it's more shocking when a bomb blows up somewhere you've been to or know well, with the inevitable thought of "there but for the grace of God go I". I must admit that, even after I'd been to Brussels, I wasn't really aware that it had a sizeable population of North African Muslim immigrants or that its Molenbeek district was home to large numbers of jihadis who had returned from fighting in Syria: like most people who go to Brussels, I stuck to the the tourist quarter around the Grand Place with its bars and cafes.

After a massacre such as this week's, the inevitable question is asked: what we can do to stop it happening again? Last night, in a special edition of the BBC's Panorama programme, the investigative journalist Peter Taylor sought some of the answers.

For the the last decade or so, Taylor has been investigating the role of the intelligence agencies in the fight against Islamist terrorism (before that, he spent much of his career looking into their covert operations in the thirty-year conflict in Northern Ireland). A few things soon become apparent about those suspected of carrying out the Brussels attacks and the ones in Paris last November: they tend to have friendship or family links with others in their terrorist cell, to be from not particularly religious backgrounds, to be involved in petty crime and are often recruited whilst in prison.

If the alienation felt by many young Muslim men in Europe, which leads some of them to become jihadis, has socioeconomic rather than religious roots (albeit that it often take a religious form), the answer to the violence perpetrated on the streets of its cities becomes clear: tackling the lack of integration in housing and schools and providing decent jobs as an alternative to the low-level gangsterism which sees some of them eventually enter the ranks of Islamist terrorist networks like ISIS. The real question is whether European governments have the desire to do it. 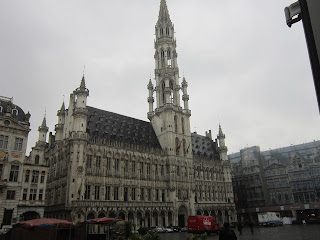 I saw the new Stella Artois advert for the first time yesterday and it got me thinking.

Did you, like me, think that the first pale lager was brewed in Pilsen in 1842?  Did you also think that Stella Artois was launched as a Christmas beer in 1926? Well, it seems that we were all wrong and the boys from AB-InBev are here to set us straight: Sébastian Artois started knocking out the stuff shortly after he took over the Leuven brewery in 1717. The beer history books are clearly all going to have to be rewritten.

A pie and a pint

I've been highly amused by the extensive press and TV coverage of the controversy caused by a pasty winning the British Pie of the Year award.

Although I don't really go in much for the idea of beer and food matching, there is nothing finer than a pork pie and a pint of bitter. So what qualifies as a pie, and what doesn't?

To me, a pie has to be fully enclosed, so a dish topped with a pastry lid isn't a pie, whatever it says on the menu. On the pie/pasty issue, I'm instinctively with those who say that they're two separate things, but I'm not really sure why. It's nothing to do with the filling, sweet or savoury, or whether it's served hot or cold, so maybe it just comes down to the shape. 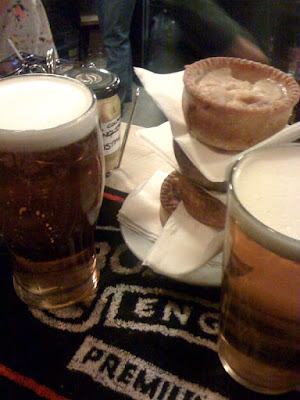 Today is the seventieth anniversary of a disaster at Bolton Wanderers' home ground Burnden Park which claimed the lives of thirty-three football fans.

When you read what happened at that FA Cup quarter-final in 1946, it's hard not to think of the Hillsborough disaster in 1989: policing and communication failures, a build up of pressure outside the turnstiles, an exit gate opened to relieve the crush leading to a sudden influx onto an already overcrowded, and badly designed, terrace, people at the front unable to escape being asphyxiated and the press subsequently blaming the fans' behaviour for their deaths. But whereas Hillsborough has rightly been remembered every year for the last quarter of a century, the disaster at Burnden Park has been all but forgotten.

A number of theories have been put forward for that: the death toll not seeming particularly high at the time given the military and civilian losses of the Second World War which had just ended, the fact that unlike the football disasters of the 80's (Bradford, Heysel, Hillsborough) the game wasn't seen live on TV by millions of people at home, and the lack of a campaign to hold people to account for what happened, Whatever the reason, we should remember its victims today. 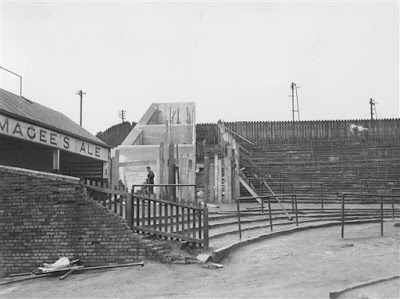