Back in time for beer, wine and spirits

BBC Four showed an episode from the series Timeshift last night, first broadcast in 2012, about British drinking habits across the twentieth century.

I'd seen some of the archive footage before, and some of it was about drinking wine and spirits at home rather than beer in pubs, but there were still some interesting contributions, including from Pete Brown, talking about lager advertising, and Ruth Cherrington on how women fought to become members of working men's clubs, rather than just guests admitted with men for social occasions.

There was also a statistic at the end of the programme about British alcohol consumption being the same now as it was in 1900, although of course that doesn't tell you what's being drunk or where, or indeed how strong it is.

In the current situation of locked pubs, it was rather poignant to watch men jostling at the bar for a pint, and made me reflect how we all took that pleasure for granted until a few weeks ago. I just hope it doesn't become a historical document of a vanished social institution akin to some prehistoric artefact we might find ourselves now and wonder what it was for. 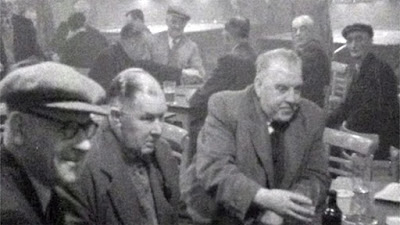 In the 1950s and early 1960s, the blues collector, writer and producer Sam Charters travelled across the American South locating and recording artists who hadn't been heard since the late 1920s, and many of whom didn't even own the discs from their sessions for record companies such as Columbia, Paramount and Victor. I've got his 1959 book The Country Blues, which is based on those trips, as well the three album series Chicago/The Blues/Today! which he recorded for Vanguard in the mid 1960s, in the more urban setting of that city's South Side black ghetto.

Document Records has now released the 1962 film The Blues which he shot on a 16mm cine camera while his wife Ann held a microphone to capture the sound on a reel to reel tape recorder, featuring many of the bluesmen he had met on his earlier trips to the South. There's also an hour long interview with Sam and Ann Charters about the making of the film, and a CD with the music which she recorded as well as some of the artists' original 1920s tracks.

The great thing about their film is how it links the music to the artists and their lives, recording them in their homes and neighborhoods, and in the case of Furry Lewis at work as a street sweeper in Memphis.

The most amazing story though is to be found in the liner notes, which explain how Sam and Ann Charters came to wander by complete chance into the small industrial estate in rural southwest Scotland where Document Records have their office and warehouse.