As flights to the United States began again this morning, the news reached me, via a roundup email from Jazz North West, that one of midtown Manhattan's most historic hotels, the Pennsylvania on Seventh Avenue, which closed at the start of the Covid pandemic last year, is to remain shut and will eventually be demolished. The Pennsylvania, opposite Penn Station and close to Madison Square Garden, was not only a venue for live jazz in the forties, but also saw its phone number become a swing standard.

On my first trip to the United States in 2002 - a baseball tour by coach along the East Coast from Baltimore to Boston, with stops in Philadelphia, New York City and the Hall of Fame at Cooperstown in upstate New York - we stayed at another of midtown Manhattan's iconic hotels, the Edison on 47th Street, whose ballroom also hosted live music in the big band era, and drank in the bar where Luca Brasi met his end in The Godfather. 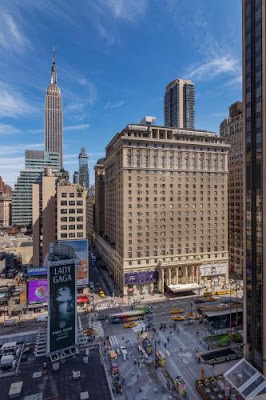