With a second jab of the Covid vaccine in my right arm, I finally had my first pint of cask beer in, or rather outside, a pub since the beginning of last March yesterday afternoon (I've drunk bottles and cans and takeaway draught beer at home across those publess months, but none of it was really the same).

It was the same pub and beer as nearly fifteen months ago, when the pandemic was still, or so it seemed back then, happening elsewhere, in northern Italy and China, and being able to order a pint was something you took for granted.

It felt almost a religious moment and I sat and looked at it for a minute, delaying the experience of the first sip, which, if not quite Ice Cold in Alex, took a good third of the pint. The beer seemed darker and heavier, and the hops bitterer, but I'm sure that's down to it being the first for a long time.

There was some talk earlier this year that cask beer was finished, as people had become used to drinking other things at home, and breweries and pubs wouldn't risk producing or stocking it, but thankfully none of that has happened, and, with the initial rush of unreleased demand and fewer lines on the bar, there have been reports of higher quality pints as the turnover essential to keeping live beer fresh increased. The pub I went to is also a tied house of one of the long established family brewers in the Manchester area, so people expect to see their cask beer on the bar there, even if they had to switch to keg and bottled beer sold online and in supermarkets to survive through the lockdown of their premises.

It helped of course that it was a pleasant afternoon with a warmish breeze, and with people allowed back inside the pub the beer garden outside wasn't as full as it had been the last couple of times I've walked past; as someone once said, I shall return. 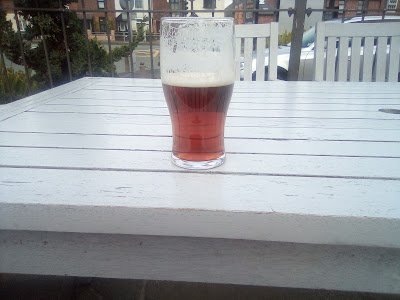