We're about halfway through Stockport Beer Week, an annual event now in its fourth year which celebrates the town's pubs and breweries. I went to both the press and public launches for it last week, kindly hosted by Robinson's Brewery and their market place house the Bakers Vaults respectively, and am planning to go to a couple more events on it this week too.

There are a few things which are notable about Stockport Beer Week:

2. It's the only beer week in England hosted by a town rather than a city;

3. It's the only one, I'm pretty sure, which is organised by the local CAMRA branch, the others being commercial ventures promoted by pubs and breweries. 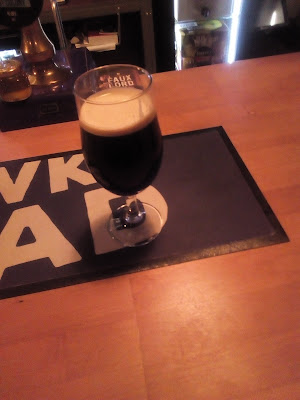 The Redrock entertainment complex in Stockport has won the Carbuncle Cup, an annual architectural award for the worst-designed new building in Britain whose name comes from Prince Charles' description of a proposed extension to the National Gallery in London.

I've never actualy stepped inside the place myself, but some of my younger relatives have been to the cinema there and seem to like it, and it doesn't strike me as any worse than the other buildings which were nominated for the prize, or lots of others that easily could have been. I also know that, unusually for a place like this, one of its bars serves a cask beer from the Stockport brewery Robinsons, their golden ale which CAMRA's rules on inclusivity preclude me from naming (at least they've changed the pump-clip to a less sexist one).

Stockport really is two towns now: the area around the market place, and to a lesser extent along the main Wellington Road, where there are lots of new bars, eating places, museums and music venues, and Merseyway, the sixties-conceived shopping precinct at its centre which, although perhaps thought futuristic when it was built, has aged badly and, despite a couple of renovations in the last three decades, is now looking a bit sad and forgotten, with most of its large retail units standing empty.

I know that the council has redevelopment plans for the area between the bus station and Stockport's most impressive architectural and engineeering feat, the Victorian railway viaduct which spans both the River Mersey and the M60 motorway, from which Friedrich Engels once looked down (both literally and metaphorically) on the town, and which you can just about see in the background of the photo below, but the thing which I think would really transform the centre is if the council opened up the section of the river which runs beneath the pedestrianised Merseyway, which was hidden with concrete slabs when it was built in the mid-60s, and made it into a feature, as has already been done to a small extent at one end of it. That radical action might not make Stockport the Venice of the North, but it would create a natural feature that could then become a focal point for a hopefully more successful regeneration of that part of the town. 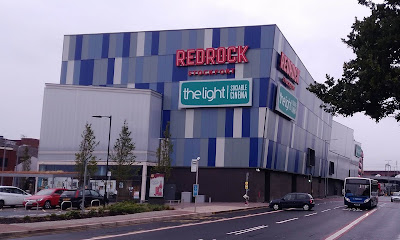