As expected, and widely predicted by the local media, the planning committee of Stockport council yesterday granted permission for the Railway pub in Portwood, on the eastern edge of the town centre, to be demolished to make way for a retail development.

The Railway, whose name comes from the line that once ran behind it, which closed to passenger trains in the late sixties before being buried beneath a motorway, was the scene of many CAMRA events, the recipient of numerous awards and the start or end point of several pub crawls, and the local branch made a forceful, if sadly ultimately unsuccessful, submission to the planning committee objecting to the application in an attempt to save it. It has been known for selling stronger and darker beers and real cider, and was a regular participant in the Winter Warmer Wander, Mild Magic and Cider Circuit promotions to showcase those styles. It was also a favourite of the Good Beer Guide pub ticker and blogger Simon Everitt when some of us took him around the town a couple of years ago.

The pub's owners seem to have taken advantage of certain aspects of planning law to obtain the council's permission for demolition to take place: relying on an application made and granted in 2005, on which minimal work was subsequently done, and citing the disrepair that the building has been allowed to slip into it, so that it is now allegedly unsafe and impossible, or rather uneconomic, to save it. 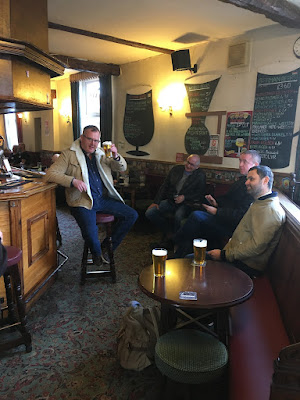 In the Railway with fellow CAMRA members and bloggers, October 2019 (photo by Simon Everitt from his BRAPA blog)