Wythenshawe between the wars

I've been reading 20th Century Pub this past week, a new book from beer bloggers Jessica Boak and Ray Bailey which charts the ups and downs of that quintessentially British institution across the last hundred years or so, and also, by way of acknowledgement, namechecks fellow bloggers and local CAMRA faces Pub Curmudgeon and Tandleman.

There are quite a few references to Manchester pubs. I was particularly interested in the section about how none of the six pubs built between the wars in Wythenshawe, the so-called garden suburb constructed by the city at its southern edge from the late twenties to early fifties and once apparently the biggest public housing estate in Europe, still exist as pubs, and indeed, according to the website they cite, five of them no longer exist even as buildings.

My grandparents moved to Wythenshawe from Old Trafford in the late thirties (he worked as a toolmaker at the Metrovicks engineering factory in Trafford Park and she as a barmaid at the Gorse Hill Hotel, a pub in Stretford to which she'd transferred from another Threlfalls house in her native Wigan) and I remember most of those pubs from the seventies and eighties, in particular the Benchill Hotel, the closest to where they lived and from where he was fetched when the telegram arrived informing him that his brother had been killed fighting with the British Expeditionary Force in Belgium in 1940, and whose weekend discos my older cousins later frequented. The nightclub attached to the Royal Thorn in Sharston was also where student parties were held by my secondary school in the late eighties.

One of the other pub types they look at is the post-war estate pub, those unloved flat-roofed buildings which were once common in inner-city Manchester, outer suburbs such as Wythenshawe and the towns surrounding them, but which are now as much in danger from conversion to other uses or the swing of the developer's wrecking ball as the pre-war drinking establishments which preceded them.

I also went to the Gateway in East Didsbury yesterday, one of the Manchester pubs Boak and Bailey visited while researching their book, and perhaps uniquely, as an inter-war roadhouse which is now a Wetherspoons pub, one which spans two of the categories to which they devote chapters in it. 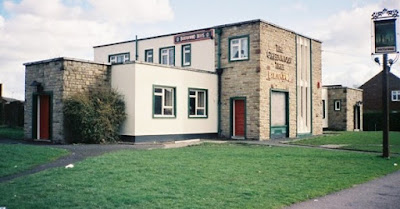 I went to Leeds on Friday night for Salford rugby league club's match at Headingley, the result of which we shall quickly skip over.

Up until a decade ago, when I left its employ, I used to go to Leeds fairly regularly as the bit of the DSS/DWP I worked for had its headquarters there, in Quarry House (nicknamed the Kremlin by the locals), as did the trade union group of which I was a branch rep.

Leeds station must be high up a list of railway termini with decent pubs in and around them: the Scarborough opposite the station was the the pub we usually ended up in after meetings at the adjacent Queens Hotel, but there's also now a Head of Steam just around the corner, and on the concourse itself a newish bar from the nearby Ossett Brewery as well as the Wetherspoons which back in 2005 was one of the first pubs to apply for a twenty-four hour licence and where on Friday I enjoyed a fresh, cellar-cool pint of Leeds Yorkshire Gold with lots of zingy, fruity hops bursting out of it (easily a 4 on CAMRA's beer-scoring scale).

Since Carlsberg closed Tetley's, the major brewer in the city, in 2011, the micro Leeds Brewery has become its flagship beer producer. As well as a range of bitters (Yorkshire Gold, Leeds Best and Leeds Pale), it also brews Midnight Bell, a dark mild, and thus, having a professional rugby league team, now only needs a tram system to join Salford as a city which fulfils all three aspects of Ron Pattinson's definition of civilisation. 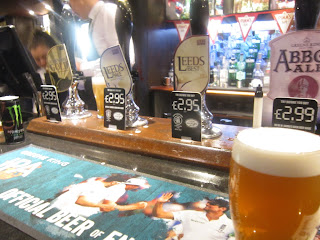