Out of the Public Eye

The programmes on Talking Pictures TV, broadcast on Freeview channel 81, are fast becoming some of my favourite on television.

As well as documentaries, like John Betjeman's elegaic early sixties train trip from Kings Lynn to Hunstanton, on a now closed north Norfolk branch line, and films such as the social realist late forties film noir "The Blue Lamp", with its superbly-shot finale at the White City dog track in west London, there are lots of repeats of sixties and seventies drama series.

My current favourite is the detective series "Public Eye", made for ITV between 1965 and 1975. I hadn't heard of it before and am not sure why, unlike many other, in some cases inferior, shows from the era, it hasn't been repeated on a more mainstream channel.

Although the central character, private detective Frank Marker, might seem like a bit of a TV cliche, a loner, slightly dishevelled and with a somewhat murky past, the writing and acting really lift it (as with my favourite TV detective, Columbo, it's now impossible to imagine anyone else playing the role apart from Alfred Burke, despite neither he nor Peter Falk being first choices for the part), and span the comedy of the Christmas special "Horse and Carriage" to the pathos of "The Man Who Said Sorry", a terse, almost hour-long, two-hander, apart from the dialogue-free opening scene and the final one, where Marker chats to his sometime ally, sometime adversary, DI Firbank, at their usual public bar meeting place.

The location of the series moves around southern England, but for the latest, and final run, Frank Marker has setttled in Eton, renting a spartan shopfront office where he seems to subsist on instant coffee brewed on a single gas ring and takeaway meals from the adjacent Chinese restaurant. There are lots of late sixties and early seventies details, from keg fonts in the pubs to his fee of six guineas plus expenses (later decimalised as £6.50, a slight increase, no doubt the result of rising inflation, although given his seemingly sparse workload it appears doubtful that the operation would have really been commercially viable, especially in one of England's posher towns where he also rents a flat).

Perhaps the coolest feature of the series though is the jazzy theme tune, composed by Robert Earley.

Last orders at the Unicorn

One of Manchester city centre's more traditional pubs, the Unicorn Hotel on Church Street, is closing this weekend for a refurbishment.

There have been some concerns that the pub's owners - Enterprise Inns, the pubco formed out of the the ex-Bass tied estate in the early 90s - were going to remove distinctive features such as the island bar and wooden panelling and turn it into a sports bar, as they did with this historic building in Cardiff last year, but thanks to the efforts of the soon to be former landlady, Historic England and CAMRA's Heritage Pubs committee an application to grant it Grade II Listed Building status was fastracked by Manchester City Council, a welcome outcome given the new high-rise apartment buildings that have risen around it in the last few years which also seemed to threaten its future.

The Unicorn was built in 1924, originally, as its name suggests, as a hotel offering food and accommodation to local businessmen and commercial travellers (there's a fascinating history of the pub in the report written by Historic England's surveyor).

I've been drinking in the Unicorn for the last twenty years or so, mostly while attending meetings in the upstairs function room, at first union and political ones, and in the last decade those of Manchester Jazz Society, which until last week had met there every Thursday evening since the mid 90s (and before that in other pubs and clubs around town since at least the early 60s), but has now had to relocate, to an even more historic city centre pub, the Britons Protection.

Apart from its architectural features and atmosphere (which Tandleman captured well here), the other attraction of the Unicorn is that it's the last pub in Manchester city centre with Draught Bass as a permanent cask beer (as befits a former headquarters of the Honourable Order of Bass Drinkers, and which you can see still with its Bass signage here). Let's hope that, as well retaining the interior, the new licensees keep it on the bar too.


Unicorn pump-handle and Bass ashtray, kindly given to me by the current landlady 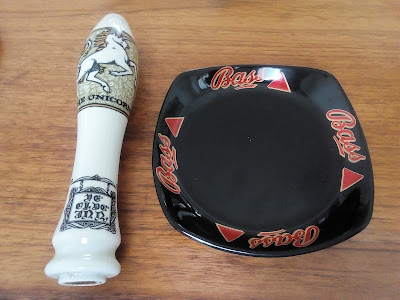 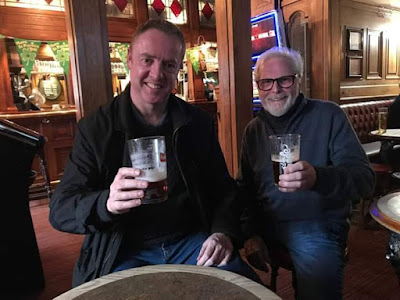 I watched the two games in Major League Baseball's London Series this weekend, broadcast on BBC iPlayer from the former Olympic stadium in east London.

There have been a few complaints by players and others about the event: the aerodynamics of the stadium allegedly affecting the pictchers' abilty to throw breaking balls; glare off the white seats making it diffcult for outfielders to pick up fly balls; the extent of the foul territory behind home plate and along the base lines causing problems for the catcher and infielders; and most spectators being American tourists or expats (not to mention the sky-high prices of some of the tickets, many times that of those for an equivalent match-up in the US, and for food and drink at the game, with two foot-long hot dogs £25 and the 330ml bottles of Heineken being hawked in the stands £6.50).

Despite the logistics of flying the two teams three and a half thousand miles across the North Atlantic and transforming the football ground where West Ham now play their home matches, including importing North American soil for the pictcher's mound and infield dirt around the basepaths, I think MLB will count the event as a success, albeit an expereience to learn things from, especially given that the New York Yankees and Boston Red Sox of the American League East Divison served up the big home run-hitting that most fans seem to want to see at the ballpark, rather that the National League-style "small ball" of pitchers' duels, base-stealing, bunts, groundouts, double plays and pitchers batting that I prefer myself.

I first watched baseball in the 2001 MLB season, when Channel 5 showed two live games a week, ESPN's Sunday and Wednesday Night Baseball (actually broadcast in the early hours of Monday and Thursday morning here, which is why, like most fans I suspect, I used to record them, and then watch them when I got in from work). In 2002, I went to the United States for the first time, on an organised coach tour along the East Coast, stopping at ballparks in Baltimore, Philadelphia, New York and Boston for Orioles, Phillies, Yankees, Mets and Red Sox games with my workmate who got me into the sport, followed by independent trips to New York in 2003 and 2005 for a Mets double-header and weekend series against Arizona and the Los Angeles Dodgers at Shea Stadium and to Chicago in 2004 for a Sunday afternoon Cubs-Pirates game at Wrigley Field as part of a blues pilgrimage to the city with my brother-in-law. After Channel 5 stopped broadcasting baseball in 2008, I watched ESPN's games on Top Up TV through a card decoder that slotted into the back of your set, until that too finished in 2013.

I still follow the fortunes of my favourite team (the Cincinnati Reds) online, and watch video clips of highlights from their games (insert joke here), but it's not really the same as watching a whole game, with the pitchers making adjustments as the batting lineup rotates through nine innings, series or season, getting to know the idiosyncracies of each ballpark and the players on each team. For the serious fan, there's a multitude of stats to have fun with, from WHIP (walks and hits per inning pitched) for pitchers to RISP (runners in scoring position) for batters, and many, many more (the fact that the scoreboard at the London Stadium spelt out Runs, Hits and Errors, rather than just the RHE columns that you'd see at a US ballpark, was mentioned more than once in this weekend's commentary).

I like to think that I still know the rules of baseball pretty well (including the supposedly impenetrable infield fly rule that I've never had any problem understanding, or explaining to others, and which was invoked in Game 1 on Saturday), although I had to dig out my pocket-sized rulebook yesterday afternoon when Aroldis Chapman came in from the bullpen to close out the game for the Yankees in the ninth inning to check on the conditions for a pitcher to qualify for a save.

It seems that you can now watch BT Sport's baseball coverage by downloading their app to your phone without being a broadband customer, so I may check that option out for continued regular viewing after getting my two game fix these last forty-eight hours. 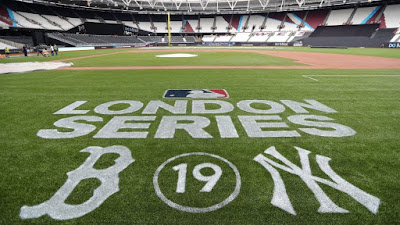