I've had a bit more time than expected for books this year, for obvious reasons; getting out into the countryside regularly for long walks also enhanced my appreciation of the rural scenes in some of the novels I read.

The Train Was On Time by Heinrich Böll

I read this short novel, about a young German soldier travelling by rail towards the Eastern Front in World War II, and what he thinks will almost certainly be his death, after hearing it recommended on Radio 4's A Good Read.

Another novel about a young soldier in World War II, an American prisoner of war who experiences the Allied firebombing of Dresden, as did Vonnegut himself.

I read this novel about life in a postwar Midlands factory and the terraced streets around it after watching the film based on the book, part of the new wave of social realist film and literature by working-class actors and writers.

This had been on my bookshelf waiting to be read for a while. It combines time travel and gender switching in a very postmodern way for a novel written in the late 1920s.

Another postmodern novel which I read after seeing the film adaptation of it, starring Meryl Streep as the title character and Jeremy Irons as the upper middle-class fossil collector who meets and falls in love with her while walking along the shoreline near Lyme Regis on the south coast of England (and which I might just get to return to the still closed public library almost a year after borrowing it).

A Journal of the Plague Year by Daniel Defoe

I don't need to tell you why I read this in March. Some of the parallels with the current pandemic are uncanny: people shielding in their houses, or being confined to them, while wealthier families bribe officials and escape London to their second homes in the country, thus spreading the disease there, cash being seen as a potential source of infection, wild rumours and theories about the causes and origin of the plague sweeping through the city.

A short essay about Camus' native Algeria, famous for the line "In the midst of winter, I found there was, within me, an invincible summer", a sentiment that seems particularly apt this year.

A mill on the bend of a river outside a small town on the Lincolnshire-Nottinghamshire border and the flat land around it are the settings for a tragic story about a brother and sister growing apart until finally reunited in death. The second book is a collection of three short novels, the first volume of fiction Eliot published, about Anglican clergymen in the Warwickshire countryside of her childhood.

A dark novel which switches between the emotions sparked by  the fall of the Berlin Wall in 1989 and the disturbing legacy of wartime German occupation in rural southern France.

The first two are novellas set in the ancient world, and the last a short novel about a drowning sailor in the North Atlantic in World War II, in which Golding served as a naval officer, whose plot is almost impossible to describe without revealing the twist at the end of it.

This rambling shaggy dog story about a young man and his battle recreation-obsessed uncle, complete with lengthy diversions, diagrams and squiggles, was considered unfilmable until a screen version starring Steve Coogan was released in 2006.

I read this Trumpian tale of a self-made American businessman after seeing this, banned by Amazon, review of it.

The Tenant of Wildfell Hall/Agnes Grey by Anne Brontë

The two novels by the youngest and least known of the there literary sisters both deal with the position of women in mid-Victorian society, one the estranged wife of an alcoholic gentleman and the other a farmer's impoverished daughter forced to become a children's governess.

I picked up this long comic novel about the wanderings of an eternally cheerful soldier through the Austro-Hungarian Empire in World War I after seeing this article by Adrian Tierney-Jones (I finally got round to reading A Time of Gifts, the first part of Patrick Leigh Fermor's account of his walk across interwar Europe, from Rotterdam to Constantinople via Germany, Austria, Czechoslovakia and Hungary, for the same reason).

When the weather is warmer, and the virus has been suppressed, the vaccine proved effective and travel restrictions lifted, so probably in the spring of 2022 now, I plan on finally making my own trip to Austria and Bohemia and, as Richard Boston said of his visit to Prague on a mid-sixties rail holiday through Central Europe in his book Beer and Skittles, spend a few days "going from place to place drinking this wonderful beer and feeling more and more like the good soldier Sjvek".

I've finally got my hands on some beer from Manchester Union, the microbrewery founded a couple of years ago to brew Czech-style lagers (their head brewer is well known in Manchester beer circles, and to me personally as the mate of one of my brother-in-law's ex-colleagues).

Having only been available as a draught beer in the pubs that stocked it, and at the brewery tap, a railway arch behind Piccadilly Station in Ardwick which opened on Saturdays before lockdown, the pandemic has prompted them to crowdfund a canning line and sell their products online.

The brewery's flagship beer is a golden Pilsner-type lager, but they also now brew a dark lager with a dense white head and fruity nose. At 4.5% and 4.8% abv, they would probably both be classified as a 12° Lezak if they were brewed in the Czech Republic. 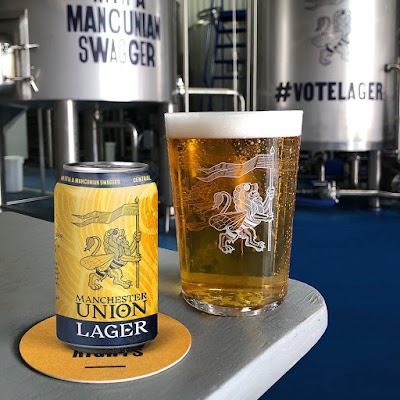 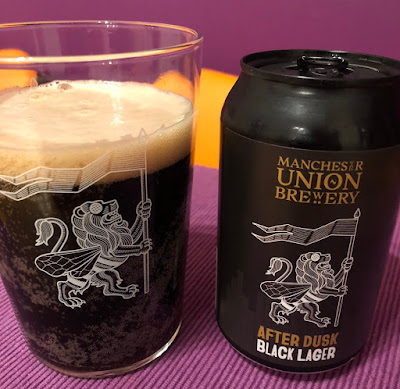