Not to Bury Them

One of England's oldest clubs, Bury FC, was expelled from the Football League yesterday for failing to meet their financial requirements, and Bolton Wanderers given a fortnight's stay of execution as they continue to search for a buyer to save the club.

I've been to watch Bury a few times over the years, often when the Premier League was on an international break, and until the late 90s paid on the turnstile to stand in the appropriately named Cemetery End at their home ground, Gigg Lane (still homeless Swinton rugby league club and fan-owned breakaway FC United have also played there in the past). I always found it charming that, as well as their 1900 and 1903 FA Cup wins, the honours list printed in the matchday programme also included their highest League position, a fourth place finish in the First Division in 1926.

Of course, Bury's location just a few miles north of Manchester, which makes it a shortish bus or tram journey for a casual fan like me, is also one of its problems, given the proximity of the two big Manchester clubs, and, as in other nearby towns such as Oldham and Stockport, there are probably as many City and United fans there as there are those of the hometown team (Stockport, like Tranmere Rovers on Merseyside, got round that for a while by playing on Friday nights).

The other problem facing small clubs like Bury is the huge inequality of income within the football pyramid (you could argue that the start of that was the abolition of the maximum wage for players in the early 60s which saw the decline of other Lancashire mill and seaside town clubs Bolton, Burnley and Blackpool). A fan outside Gigg Lane on TV last night said that Premier League clubs would come to rue letting small town lower league clubs like Bury go to the wall as they produce young players for them, but I think the former can probably now rely on their own academy systems and scouting networks to identify and attract both local and international prospects.

For Bury fans wondering how to spend their Saturday afternoons after the club's liquidation - and for those of Bolton who seem set to follow them - the answer is surely to do what supporters of other "lost clubs" like Accrington and Wimbledon have done and re-form as a non-league side and begin the ascent up the divisions again.

In my first phone call to the club's ticket office twenty-odd years ago, I learnt as soon as the woman there picked up the phone that while to outsiders the town and club is "Berry", to locals it is definitely "Burry". 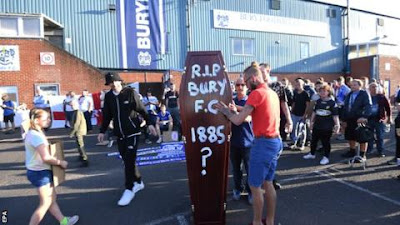 I've just picked up online a cheap secondhand copy of the Good Beer Guide to Munich and Bavaria, published by CAMRA in 1994 and written by Graham Lees, one of the four founders of the organisation (I especially like his dedication of the book "to all who appreciate good beer, regardless of borders").

Although I went to pubs in Dublin and the West of Ireland in the late 90s and early 2000s, it was as much for their historical/political and literary associations (notably the Brazen Head and McDaid's) as the beer (invariably Guinness), and my first specifically beer trip was to Germany at the end of 2009, to Düsseldorf and Cologne, followed by one to Munich and southern Bavaria in the summer of 2010 (when I accidentally attended the wedding of footballer Philip Lahm in Aying). I've been back to Düsseldorf and Cologne numerous times since then, and to the nearby towns Aachen, Bonn, Ratingen and Wuppertal, and in 2012 travelled to Upper Franconia in northern Bavaria to sample the very special pubs and beers of Bamberg and Forchheim.

Apart from some brewery takeovers and reorganisations, not that much seems to have changed on the beer front in south-eastern Germany in the last twenty-five years, thanks no doubt to the Bavarians' well-known conservatism (in both brewing and politics). The beechwood-smoked malt lager Schlenkerla Rauchmärzen is described as "virually black as coal" rather than the dark brown that I remember it being on draught in the brewery tap, but I think that might just be a question of perception rather than any change in the grist, and the warning that train travel around the state is expensive unless you book tickets in advance has been superseded by the relatively inexpensive Bayern day ticket, which covers buses, trams and underground services too. The advice that "Bavaria, especially in country areas, is likely to be a little stomach-shrinking for vegetarians" is probably still true given the locals' propensity to wash down huge plates of pork and sausage dishes with their litre steins of lager, and the description of the Hofbräuhaus in Munich as "plagued by coachloads of gawping tourists" (not to mention the oompah band) certainly is.

The next beer trip I'm planning is to central Europe, travelling by train from Prague to Plzeñ, Regensburg, Freising, Munich and Salzburg, although it'll probably be in the winter rather than summer months given the punishingly hot weather that now seems to afflict that part of the continent almost annually, and that direct flights between Salzburg and Manchester only appear to depart during the skiing season (assuming that planes and visa-free travel are still operating then). 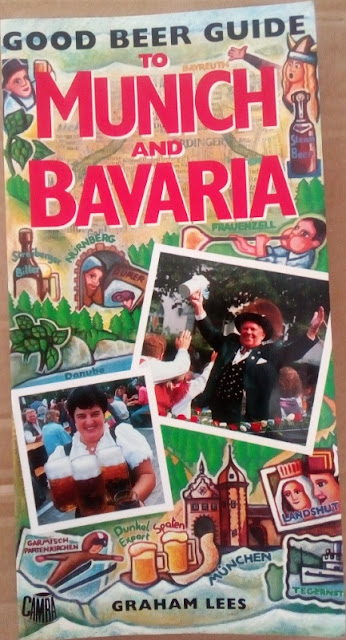 Bottles of beer for the boys

I was looking through a photo album yesterday and spotted a couple of photos of my mum's dad that I hadn't seen for a while.

He was born in Beswick, east Manchester, in 1909, but grew up in Old Trafford, started work as an apprentice at the nearby Metrovicks engineering factory in Trafford Park in the late twenties and became a toolmaker and a shop steward in the Amalgamated Engineering Union (one of his mates on the shop floor was Hugh Scanlon, who became President of the union in 1968). He moved to the new Manchester Corporation housing estate at Wythenshawe just before he got married in 1938, and to Metrovicks' Wythenshawe Works when it opened in the late fifties, working there until it closed in the early seventies, and he became a porter at Barnes Hospital.

The first photo is of a works social for long-serving employees, sometime in the sixties in the canteen at Wythenshawe Works. My grandad is on the left (naturally) in the light suit and glasses. 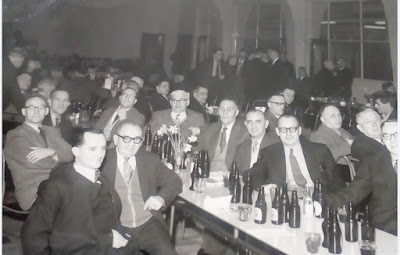 Apart from all the men wearing ties (I wonder who put an end to that tradition?), the other thing you notice is the beer bottles lined up along the table, supplied by the company for the event. I'm not sure any employer now serves alcohol to its workers on the premises given the potential for litigation if things go awry. although I think some still open a bar tab at a venue off-site for them, and even then there are possible legal pitfalls (by the time I started working in the civil service in the nineties, drinking at office parties had been banned after someone fell to their death from a window at one in Salford). Even zooming in on the photos, it's hard to make out the label on the beer bottles, but I think it might just be that of Groves & Whitnall, the brewery which inspired Coronation Street's Newton & Ridley.

The second photo, from around the same time, is of my grandad eating his butties at his work bench. He's also reading The Sun, which had replaced the Daily Herald in 1964 and was still then a Labour-supporting newspaper, and would remain one even under Rupert Murdoch's ownership until the mid-seventies. 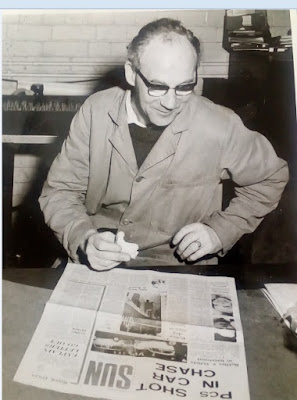 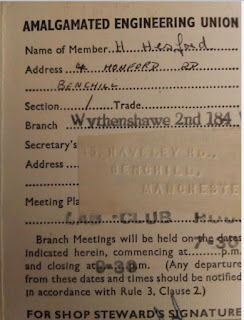 Back to the Briton's

Having not been for a couple of years, I went to the Briton's Protection in Manchester city centre twice last week: for a meeting of Manchester Jazz Society, and then with Stockport and South Manchester CAMRA to present its award for best Mild Magic pub oustside Stockport.

Like the Unicorn where the Jazz Society met until a few weeks ago, I first went to the Briton's Protection for political and union meetings, some of them fringe events of conferences being held across the road at the former Manchester Central railway station, now an exhibition space and convention centre. The Peterloo massacre, the bicentenary of which falls later this month, took place in the area between the two and features on the pub's sign and a painting inside.

One of Manchester's oldest pubs, the Briton's Protection, with its long front lounge, L-shaped corridor and two rear rooms supplied by a serving hatch at the back of the bar, is known for its interior tiling and the number of malt whiskies it sells (it's also home to Manchester Whisky Club). A Grade II listed building, it's included on CAMRA's national inventory of historic pubs.

From being a former Tetleys house with an average beer offer of a couple of cask bitters from regional brewers (Jennings and Robinsons), it's now expanded its draught range to include the products of local microbreweries and other styles, including mild and stout, and well deserves its award for the former, which it now turns over a cask of every couple of days. 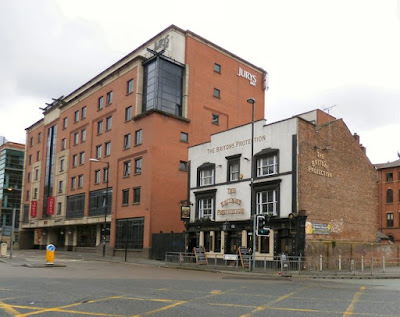