The poet Dylan Thomas famously wrote that people should "rage against the dying of the light" when approaching death.

BBC2 marked the centenary of Thomas' birth last night with a drama about his own final days in New York, where he died aged 39 in 1953, allegedly after drinking eighteen whiskies in the White Horse Tavern in Greenwich Village. Although I haven't been to the White Horse, I have walked past the Chelsea Hotel where he collapsed after his supposed alcoholic bout.

Tom Hollander, who played Thomas, apparently had to put on two stone to play the role and he did look quite like him but his performance reminded me somewhat of Chuck Berry's remark to the Rolling Stones when they recorded at Chess Studios in Chicago: "You nearly got it." I'm also not sure why an Englishman was cast as Thomas when there are plenty of Welsh actors who could have played the role such as the superb impressionist Michael Sheen. 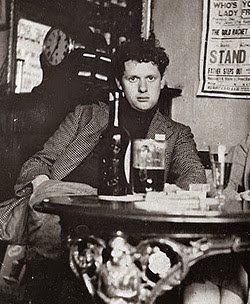 "riverrun, past Eve and Adam's from swerve of shore to bend of bay, brings us by a commodius vicus of recirculation back to Howth Castle and Evirons."

I'm now just under half way through Finnegans Wake, James Joyce's final novel, of which the above is both the end of the first and beginning of the last sentence, separated by a little over six hundred pages of – many would say unreadable – prose.

I'm not going to say that Finnegans Wake is an easy book to read – although Harold Pinter once claimed, somewhat dubiously, to have finished it without any problem as a sixth former – nor that there haven't been moments, especially in the first couple of chapters, when I haven't been tempted to give up on it. So why haven't I?

For one thing, Finnegans Wake with its puns and jokes ("flushpots of Euston and the hanging garments of Marylebone", "peats be with them", "boy fiend") can be very funny, especially the encounter between an Irishman and an invading Dane in the first chapter. As for long passages that seem bewildering when you first read them, I'd say two things. Firstly, as Joyce himself said to a young reader, it's possible to enjoy the flow of the language, the layers of legend, historical and literary allusions and the images they create without fully understanding their meaning: one of the fun things about Finnegans Wake is that nearly every sentence has multiple possible meanings and your own interpretation of them is as valid as anyone else's, although unlike some, mainly American, reading groups (over)analysing them, I plan to finish the book in a month to six weeks rather than a year or more. Also, it helps if you have some knowledge of Irish language and literature – Finnegan for instance refers to both the music hall song Finnegan's Wake, in which a hod carrier comes back to life after being splashed with whiskey at his wake, as well as Finn MacCool, the mythological hero also destined to rise again –  read what others have written about the book before you start, use a guide to it (I've found this one quite useful) and make notes as you go along.

Like Ulysses, Finnegans Wake also has plenty of references to pubs – the main character is a Dublin landlord called Humphrey Chimpden Earwicker – and beer, including Allsopp's, Guinness and Reid's family stout. I've a feeling I may reward myself with a drop when I become one of the few to finish it... 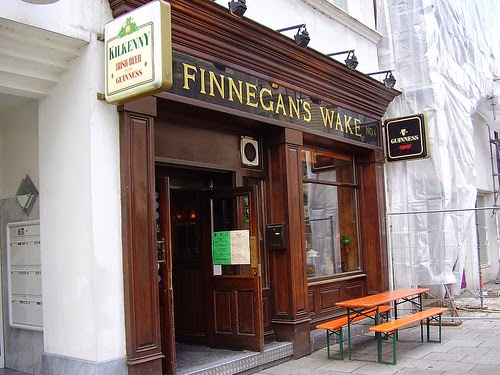