The media have had some fun in the last couple of days with a story about how someone at a high-end Manchester steak and seafood restaurant mixed up their most expensive bottle of wine with one costing a fraction of the price.

The 2001 Château Le Pin Pomerol (which makes me think of Pomeroy's wine bar where Rumpole of the Bailey swilled an inferior "cooking claret") costs £4,500 a bottle, rather than £260 which the other Bordeaux of the same vintage, Château Pichon Longueville Contesse de Lalande, is priced at.

I don't drink wine, apart from the odd glass of Champagne on a special occasion like a wedding, or maybe a small port at Christmas, but I'm pretty sure that the most expensive pint or bottle of beer I've ever drunk has still come in at under a fiver, with many of the world's great beers considerably cheaper than that.

I'm also doubtful that anyone can tell the difference taste-wise between a £260 and a £4,500 bottle of wine. I suspect that the quality pretty much plateaus at the couple of hundred quid mark, and after that you're just paying for the rarity of the label.

The democracy of the beer world, where anyone of all but the most limited means can still enjoy the best of what it has to offer, is something to be prized.

I watched the World Snooker Final from Sheffield yesterday, the forty-third played at the city's Crucible Theatre since it moved there in 1977.

For the first fifty years of the World Snooker Championship, the final was played across the country, often in less than salubrious venues, such as the British Legion club in Birmingham where the 1972 final was contested in front of spectators sitting on beer crates around the table, reflecting the slightly disreputable, bar room image the sport had before the era of television contracts and tournaments around the world, especially the Far East where the game has grown massively since China first hosted a professional championship in 1997.

I knew that the 1976 final, the last before Sheffield became the permanent home of snooker's most prestigious event, was held at Wythenshawe Forum, the leisure centre where I now go swimming, with Ray Reardon beating Alex Higgins 27-16 in a best of 53 frames match, but there were another four finals in Manchester before that, two, in 1952 and 1954, at Houldsworth Hall on Deansgate, one just down the road at the City Exhibition Hall on Liverpool Road in 1973, and one the following year at Belle Vue. 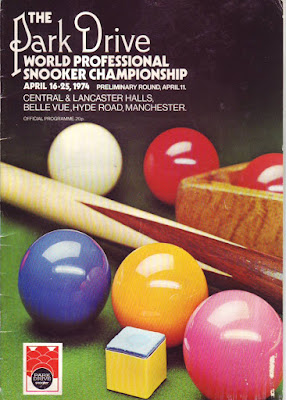