The blues at Christmas

I'm taking a break from blogging for a couple of weeks. I hope you all enjoy Christmas and New Year whatever you're doing. Here's blues pianist Charles Brown to get you in the festive mood.

This time last week, I was on my way back from Germany.

My flight from Düsseldorf to Manchester took off at half past three so as usual I arrived at the airport just after midday. Düsseldorf Airport is actually quite a pleasant place to spend a couple of hours buying presents and having one last beer (the bar has bottles of Frankenheim Alt and Radeberger Pils on draught: I chose the latter).

In the last three years, I've been to Germany quite a bit: Düsseldorf and Cologne, Munich and Bamberg. I've  been following in the footsteps of other beer enthusiasts who showed me the way to some wonderful drinking expereiences, notably Michael Jackson and his World Guide to Beer and Ron Pattinson with his invaluable pub guides. I've now got the unexplored beer lands of Belgium and the Czech Republic in my sights. And I really must get to Salzburg one day. 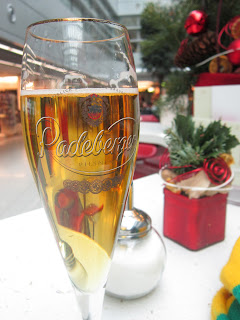 Engels, industrialisation and the Schwebebahn

I'd hate to give the impression that my trip to the Rhineland last week was just an extended pub crawl. Nothing could be further from the truth.

In fact, it was more of an educational and cultural tour with a few pubs thrown in. The highlight was visiting the house in Wuppertal that Friedrich Engels lived in as a child.

I didn't realise until recently that Barmen where Engels was born merged with Elberfeld in 1929 to become Wuppertal. As well as the house itself, you can also go in the wonderfully named Historisches Zentrum und Museum für Frühindustrialisierung next door where I not only had a chat to the guys running it about Engels, Manchester and the textile industry but also a go on a power-loom.

Wuppertal's other attraction is the Schwebebahn monorail that runs over the River Wupper. Opened in 1901, it's based on a industrial railway designed by English engineer Henry Robinson Palmer for a steel mill in Elberfeld. 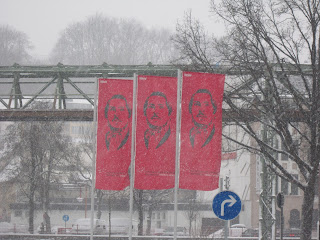 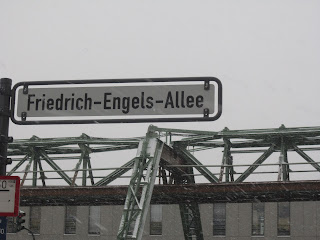 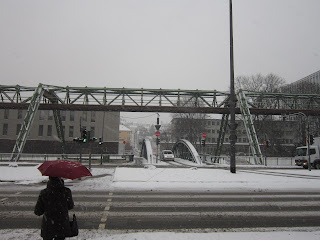 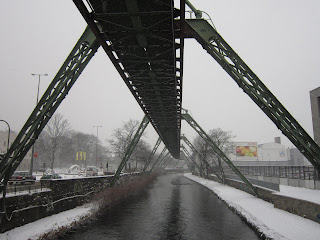 A stroll around Cologne

When I was in Cologne last week, I got to a couple of brewpubs that I hadn't been to before.

The first one was Brauerei Päffgen. It's a bit out of the way, about half a mile from the Altstadt pubs I've drunk in before, but well worth the short trip (although not that short in my case: I knew it was two stops to Friesenplatz from the Hauptbahnhof but by getting on the wrong train I ended up at Neumarkt instead. I approached a passing couple for directions and they seemed shocked that I intended to walk to it from there, claiming it would take me half an hour. They clearly underestimated my walking speed, especially when there's a pub at the other end, as ten minutes later I was in Päffgen with a glass of Kölsch in front of me. Coming out of the pub, I noticed that the spires of Cologne Cathedral next to the Hauptbahnhof didn't seem that far away and it was in fact only another ten minute walk back).

I sat in the drinking corridor at Brauerei Päffgen, partly to watch the trays of small Kölsch glasses being filled with beer from the barrel and partly to enjoy the banter between the waiters (at one point, some schoolchildren came in with a questionnaire and were laughingly passed on to each other by the staff). I've drunk Päffgen Kölsch before, in the Bierhaus en d'r Salzgass in the Altstadt, and the beer was as good as ever: uncompromisingly bitter as the Good Beer Guide used to say about Holt's.

Next up was Brauerei Malzmühle. Unlike Päffgen, Malzmühle is in the Altstadt but cut off from the standard crawl around the Heumarkt by a main road and tram line. It has a very traditional feel although looking at the photos on display it seems the present three-storey building only dates from the early 60's. Mühlen Kölsch is at the other end of the spectrum to Päffgen, being very soft and malty, a bit like Pfaffen in fact (given that Pfaffen is brewed by Max Päffgen, it makes me wonder whether he deliberately produces a beer opposite in flavour to that made by the relatives he's fallen out with).

For the third time in a row, I mistimed my trip to Cologne so that Sünner Im Walfisch was closed yet again. I would have hung around the Alstadt for a couple of hours until it was open but the Arctic temperature meant I was losing the feeling in my feet by this point. 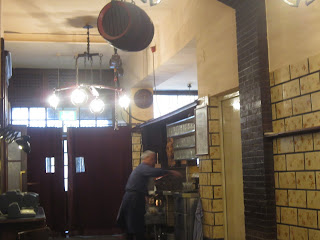 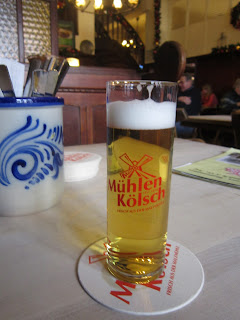 This time last week, I was about to fly to Düsseldorf ahead of a few days touring the Rhineland. Each time I've been, I've rated the Altbier produced by the brewpubs there differently.

My first stop this time was Schumacher. Between the train station and the Alstadt, it's the first brewpub you come to and is where I first drank Altbier. From the first glass, I immediately got what people meant about Altbier: the malt and hops that remind you of an English bitter combined with the crispness added by lagering. My favourite Altbier from that trip though was the hoppiest of all the ones produced by the brewpubs, Füchschen. Uerige came third behind Schumacher with Schlüssel in fourth place (I'll still drink it but find it a bit underwhelming - it's got a nutty, slightly medicinal taste that reminds me of Hydes Bitter for some reason).

On my last couple of trips, the beer I enjoyed most was Uerige, transformed from what I regarded as an average beer my first time there to a clear winner. Uerige is also my favourite pub in Düsseldorf because of its setting by the Rhine and traditional atmosphere. This time, I found Uerige a bit darker and heavier (I suspected for a moment it was Sticke, the beer they produce around Christmas, but I don't think it was). The best beer this time was one that's always been in my top two, the wonderfully hoppy Füchschen. 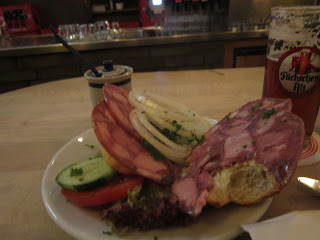 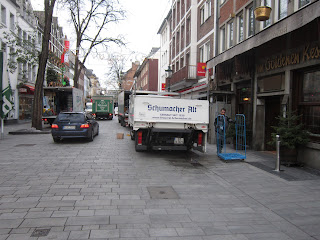 I'm off to the Rhineland again next week. I'll be going to a couple of places I haven't been to before - Ratingen and Wuppertal - as well as Cologne and Düsseldorf.

I'll also be going to a couple of brewpubs in Cologne that I haven't been to before - Päffgen and Malzmühle - as well as Sünner Im Walfisch which although just down the street from one of my favourite Altstadt pubs, Bierhaus en d'r Salzgass, has always been shut on previous trips. 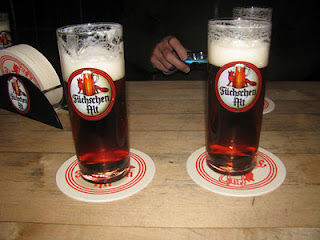 Today would have been the ninety-second birthday of the jazz pianist Dave Brubeck who died yesterday morning in Conneticut.

I know people who say they don't like jazz but who listen to Brubeck, mainly because of the ridiculously catchy Take Five, written by altoist Paul Desmond and featuring Joe Morello on drums, from Time Out, the 1959 release that became the first jazz album to sell a million copies.

Along with Kind of Blue by Miles Davis, Time Out is still the jazz album most likely to be in a non-jazz fan's CD collection, leading some jazz fans to see Brubeck's music as too commercial. I think that misses the point. I've gone in a circle with it myself: I listened to Time Out before I was into jazz and then having got into it returned to it with an extra appreciation.

Brubeck's record of standing up to racism in the 1950's when many clubs refused to book an integrated band should also not be forgotten.

Email ThisBlogThis!Share to TwitterShare to FacebookShare to Pinterest
Labels: jazz

I've written before about the French's government tax hike on beer (although apparently duty on beer will still be lower than in the UK). The 160 per cent rise now seems to have sparked a diplomatic stand-off between France and Belgium.

According to today's Guardian, the Belgian prime minister was rebuffed when he raised the matter with the French president and Belgium is now planning to increase duty on French wine.

Michael Jackson in his 1977 World Guide to Beer talks about the line running through Europe between beer and wine countries. The Franco-Belgian border now seems to be the main confrontation point on that line.

Surely the main effect of tit-for-tat tax increases on Belgian beer and French wine will be consumers on either side of the border crossing it on shopping and drinking trips. 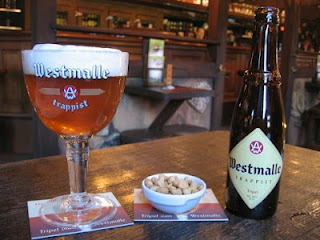 Sometimes you can connect seemingly unconnected people through mutual acquaintances or events; at other times you stumble across such connections.

Ahead of my trip to the Rhineland next week, I've just found out that Nico, the singer, actress and Andy Warhol model, was born Christa Päffgen in Cologne and was a member of the city's famous brewing family of that name.

Apparently, before her untimely death in 1988, Nico also lived in North Manchester and Salford, something else I was unaware of. 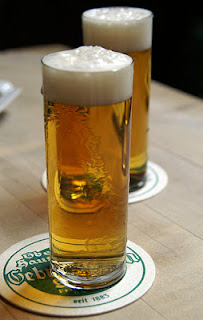 The art of spin

I've just started reading a book someone bought me for my birthday the other week, Twirlymen by Amol Rajan about spin bowling in cricket.

Like Rajan, I think spin bowling is the most fascinating and impressive aspect of cricket. In the summer of 2007, I went to a county game between Lancashire and Hampshire at Old Trafford and sat at the top of the pavilion, watching a masterclass in the spinner's art with Muttiah Muralitharan bowling off-spin for the home team and Shane Warne leg-spin for the visitors.  The performances of left-arm spinner Monty Panesar and off-spinner Graeme Swann in England's last Test match against India in Mumbai, taking nineteen wickets between them, suggest that spin has a fabled future ahead of it. 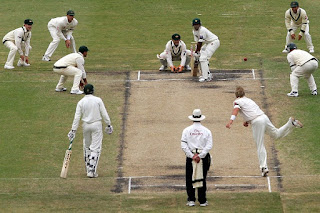