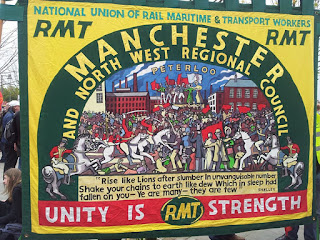 Along with about thirty thousand other people, I was in Manchester city centre this afternoon for the TUC demo outside the Tory party conference.

A lot has changed since 1819.  Working-class men and women got the vote in 1918. In 1819, the Tory Prime Minister was the Charterhouse and Oxford educated Lord Liverpool; now it's an old Etonian...

There have been only been three Prime Ministers not educated at a public school or Oxbridge, two Labour (Brown and Callaghan) and one Tory (Major). When will we see the next one?

The photo shows the RMT rail union's Manchester branch banner depicting the Peterloo Massacre, ending with a quote from Shelley's 1819 poem The Mask of Anarchy:

"Rise like Lions after slumber
In unvanquishable number,
Shake your chains to earth like dew
Which in sleep had fallen on you-
Ye are many — they are few"
Posted by Matt at 14:13