The two nations of rugby 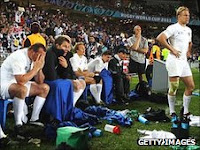 Since the 1895 split in English rugby football,  rugby league has been the Northern, working-class and professional counterpart to the Southern, middle-class and until 1995 officially amateur (in reality, semi-professional) rugby union. This weekend's World Cup matches in rugby union and Super League Grand Final in rugby league highlighted the differences between the two codes.

One of the reasons I prefer rugby league to rugby union is something that fans of the 15-a-side code claim as a strength, namely that, unlike the 13-a-side game, it can be played by people of all sizes. That might have been OK when rugby union was still officially amateur and more of a game for players than spectators but I for one wouldn't pay to watch fat guys lumbering into each and lying on the ball compared to the athleticism and speed of rugby league.

Those qualities were on full view at Old Trafford on Saturday night in the rugby league Grand Final as Leeds beat St Helens with Robbie Burrow, probably the smallest guy on the pitch, scoring a try and setting up another with two dazzling runs.  Even in slow motion the rugby league players look faster than their union counterparts. No wonder the French nicknamed league "lightning rugby" after Salford played a promotional tour there in the 1930's.

It's not just on the field that rugby league stands out, its professional image standing in sharp contrast to the dwarf throwing, ball tampering and ferry diving antics of the England rugby union team whose World Cup, not surprisingly given the players' class background, increasingly began to resemble an inadequately disciplined public school trip.

It is not just in former mining areas and ports in Northern England or the east coast of Australia that working-class people play football with an oval ball.  There is at least one place where rugby union is  truly a mass sport: Wales.  As they're still in the World Cup, that's who I'll be rooting for.
Posted by Matt at 06:33