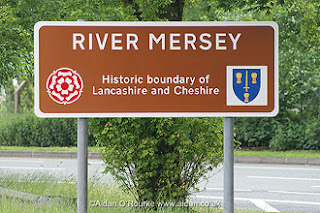 Coming off the motorway at Sale the other day, I spotted this sign showing the River Mersey as the historic boundary between the counties of Lancashire and Cheshire.

I know people who argue for the restoration of the historic English counties are often Tories but even so I think they have a point.  The objection to the post-1974 metropolitan county of Greater Manchester is not just that it is artificial and has arbitrary boundaries but also that it ignores the Lancashire identity of towns like Bury and Wigan which continue to have their own distinctive accents, cuisine and culture.

I still feel I'm crossing a natural boundary when going over the Mersey.  It's not an accident that many borders around the world are marked by rivers.

I was born in Manchester when it was still part of Lancashire, support Lancashire County Cricket Club who still play at Old Trafford and look forward to the day when Whitehall comes round to what locals have known all along.
Posted by Matt at 06:04