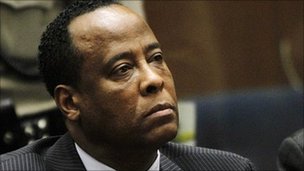 I've watched bits of the trial of Conrad Murray, the doctor accused of the involuntary manslaughter of Michael Jackson, live from Los Angeles on the BBC and Sky News.  As Tony Hancock said in Twelve Angry Men, it's just like they do it on TV, although the way American lawyers question witnesses seems a bit laborious to English eyes. Sky News have got a English barrister who's also a member of the California Bar to give expert analysis which is useful but they do keep going to a commercial break every five minutes.

Inevitably, watching the trial you come to your own conclusions about the case. Even at this early stage of the trial, I think it's pretty clear Dr. Murray is guilty as charged.  Having said that, given Jackson himself got away with sexual offences against a child, I hope Murray gets away with his crime too, or failing that receives the shortest sentence possible.
Posted by Matt at 01:59