Gadaffi: death of a tyrant 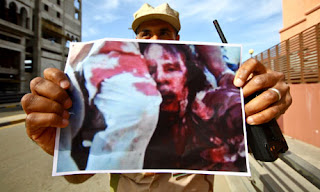 The circumstances in which Libyan dictator Colonel Gadaffi met his end yesterday may not be entirely clear yet but it seems safe to say that he was shot by rebels after being wounded and then captured.

You might think there would be pretty much universal rejoicing over the death of someone with some of the bloodiest hands in the Arab world, mainly the blood of the Libyan people themselves.

There are four groups who refused to join the jubilation of the Libyan people:

1. those on the left who supported Gadaffi as an anti-imperialist (a relatively small group of ex-Healyites, Maoists and others not of this planet) and for whom the Libyan revolutionaries are merely tools of NATO;

2. pacifists who oppose all wars and killing, often on sincere religious grounds;

3. those for whom anti-Americanism is the guiding light of their politics, from the Stalinists of the Morning Star to the ex-SWP leaders of Stop the War;

4. liberals like Amnesty International who wring their hands about the lack of "due process" in killing Gadaffi but who conversely would have opposed any trial as "victor's justice".

These currents overlap and influence each other but are all equally muddle-headed.  Meanwhile, all socialists, democrats and decent people can celebrate with those on the streets of Tripoli the demise of Gaddafi, just as we did that of Ceaucescu, Saddam Hussein and Osama bin Laden.
Posted by Matt at 05:58