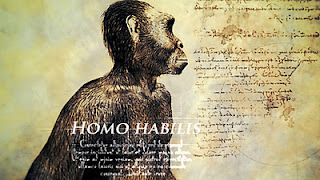 I'd been looking forward to Origins of Us, the BBC2 series on evolution presented by Dr Alice Roberts which started last night.

A number of things struck me, not least the extent to which humans' relationship with the environment has shaped evolution.  It is now thought that climate change and a thinning out of the forests of East Africa led to our hominid ancestors standing upright in order to reach food on higher tree branches about two million years ago.  The closeness of human and chimpanzee DNA, with a common ancestor about five million years ago, makes us near relatives and also underlines how ridiculous it is to divide humanity into separate races based on differences in skin colour, language or culture.

As the fossil evidence becomes ever more extensive, I look forward with amusement to how religious creationists will try to convince the rest of us that we appeared as we are now six thousand years ago.
Posted by Matt at 01:52