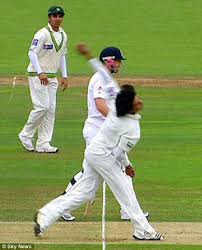 The trial of Pakistani cricketers Salman Butt and Mohammad Asif for conspiracy to accept corrupt payments currently being heard at Southwark Crown Court centres on allegations that they took money in exchange for bowling no balls.
According to the prosecution, the players were paid £140,000 for bowling no balls in the Fourth Test against England at Lord's last August.  Along with another, player, Mohammad Amir, they have since been banned from playing for between five and ten years by the International Cricket Council.

The question I keep asking myself is who the victim of this alleged crime might be.  If the allegation was that they had thrown the match for money, it would obviously be those who had paid for tickets for the Test match believing it was on the level.  But the no balls had no effect on the result.  The only potential victims I can see are bookmakers who took punters' money and then paid out when the no balls were bowled at exactly the points in the match they predicted.
Posted by Matt at 06:18

Email ThisBlogThis!Share to TwitterShare to FacebookShare to Pinterest
Labels: cricket