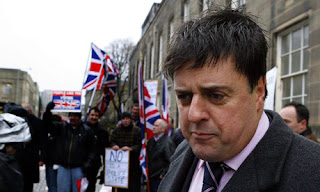 The thing that struck me most watching Panorama's expose of financial fraud by the British National Party last night - and indeed made me laugh out loud - was the shocked tones in which ex-members who had fallen out with the leadership described how they'd been dealt with.

They had been intimidated, targetted in their homes and communities with defamatory leaflets, even held hostage by heavies in the back of a van.  Who could have guessed that Nazis would deal with their opponents like this?  It reminded me of how the Irish Communist Party in the 1930's bought a printing press from the IRA and when they didn't keep up the repayments received a visit from some gentlemen with guns to repossess it rather than a court summons.

We shouldn't rely on the State - whether the Met Police or the Electoral Commission - to deal with the BNP but it's good news that their investigations into its financial shennanigans has led to yet more splits, infighting and bad blood amongst the fascists.
Posted by Matt at 02:16