Standing up for fans 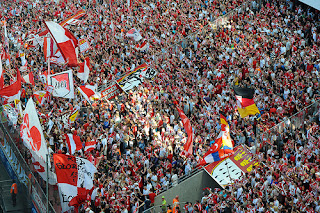 I watched the last few minutes of the Bundesliga game between FC Köln and Hannover before.  There was an unfamiliar noise in the ground, that of the fans' singing and chanting rolling down the terraces and onto the pitch.  It is of course a sound long banished from English football, allegedly for safety and accessibility reasons but in reality as part of the drive by clubs to price younger and less well off fans out of watching games live at the ground.

Either standing is inherently dangerous or it's not. If it is, why hasn't it been banned in rugby (league and union), horseracing and lower league football? Those who hold Hillsborough up as the reason for maintaining the ban on standing have to answer the question of why no one ever died on much larger terraces like the Stretford End, North Bank and Holte End.  The truth is that the ban on standing suited both the clubs who wanted to hike up ticket prices and politicians who wanted to blame fans for the failings of the police at Sheffield Wednesday in 1989.

To show what the atmosphere's like at FC Köln's ground, here's a video of fans at the RheinEnergieStadion getting behind their team.