Libraries, Labour councils and the Lansburys 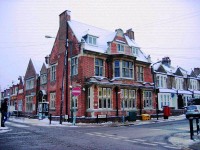 The High Court yesterday ruled that Brent Council in North West London can close half its public libraries. It's been a busy few days for Mr Justice Ouseley, the judge in the case, who earlier this week airily dismissed the educational and health needs of Irish Travellers at Dale Farm in Essex and gave Basildon Council the go ahead to evict them.

One of the libraries set to shut is Kensal Rise (pictured left), opened in 1900 by Mark Twain, and the campaign to stop its closure has attracted support from local literary celebrities including Alan Bennett, Philip Pullman and Zadie Smith. The council closed all its libraries yesterday morning and then once they'd got their judgment reopened half of them and boarded up the ones set to close.  Labour leader of Brent Ann John - channelling the American general in Vietnam who said he'd had to destroy a town in order to save it - hailed the court's decision as meaning that "we can push ahead with our exciting plans to improve Brent's library service and offer a 21st-century service for the benefit of all our residents".

In 1985, then Labour leader Neil Kninnock used his speech at the party's annual conference to launch an attack on the Militant-led Liverpool City Council, famously declaring his contempt for "a Labour council, a Labour council, hiring taxis to scuttle round the city handing out redundancy notices to its own workers."  Not a peep from Kinnock's successor Ed Miliband yesterday, maybe handing out redundancy notices by taxi is what Labour leaders object to.

The standard defence of Labour councillors making cuts to jobs and services is to blame the Tories and Lib Dems (whose local MP Sarah Teather has hypocritically backed the Kensal Rise campaign) and claim that if they defied  the government over them worse cuts would be implemented by an appointed official. Leaving aside their spinelessness, it's hard to see in this case what an official could have done worse, apart from shutting all Brent's libraries.

That there has been a very different sort of Labour councillor was also highlighted yesterday, the ninetieth anniversary of the release from prison of future Labour leader George Lansbury, his daughter-in-law Minnie and their comrades on Poplar council in East London who had defied the Tory-Liberal coalition to defend wages and services in one of the poorest boroughs of the capital.

h/t to Janine Booth for alerting me to the anniversary; her book about the Poplar revolt, Guilty and Proud of It!, is available here.
Posted by Matt at 06:31