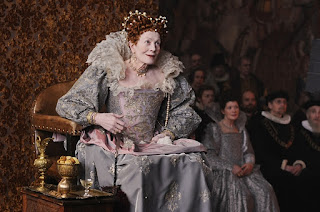 The upcoming film Anonymous starring Vanessa Redgrave as Elizabeth I is based on the hoary theory that someone else, in this case the Earl of Oxford, wrote William Shakespeare's plays.

I'm no expert on Shakespeare but it strikes me that the idea is essentially based on snobbery,  that a grammar school boy from Stratford couldn't possibly have the knowledge of the world the plays demonstrate. This ignores the fact that he had access to books - indeed many of the plays are based on classical sources like Plutarch - and that even those set in Ancient Italy or Greece have settings and characters straight out of the English countryside. Talking of which, there's a story that a Shakesperean actor was walking down a Warwickshire lane one day when he saw two men cutting a hedge. He asked them what they were doing and one of them said, "I rough-hew them and he shapes the ends", an echo of Hamlet's, "There's a divinity that shapes our ends, rough-hew them how we will".

It's commonplace to say that while Vanessa Redgrave has nutty politics, she's a great actress. While I agree with the first assertion, I'm not convinced about the second - she always seems to me to belong to the Imelda Staunton "look at me" school of overacting.

Challenged about the lack of evidence for the Earl of Oxford theory on BBC breakfast TV this morning, Redgrave countered rather lamely that there wasn't much evidence for Shakespeare either. At one level, the argument about who wrote Shakespeare's plays is a harmless literary game. It's certainly a less poisonous conspiracy theory than others Redgrave was associated with when she was a leading member of Gerry Healy's Workers Revolutionary Party in the 70's and 80's.
Posted by Matt at 12:30