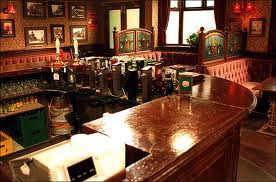 
The Rovers is a strange pub.  Everyone who lives on Coronation Street is obliged to drink there (and work opposite in the factory, garage or taxi office) and the only hot food available is Betty’s Lancashire hotpot.


The brewery which supplies the Rovers, Newton and Ridley, apparently stopped brewing cask beer in the late 60’s and started again in the early 90’s when handpumps reappeared on the bar.  In the first episode in 1960, Ken Barlow and Dennis Tanner are seen drinking halves of mild in the public bar.  The only two original cast members in the show, they both now seem to have switched to bitter although Norris Cole recently ordered half a mild, the first person to do so since I think.
Posted by Matt at 08:46