The actor Bill Tarmey who died last week aged 71 became synonymous in the public mind with Jack Duckworth, the character he played  on Coronation Street for over thirty years.

Like Jack, Bill was a wryly humourous working-class Mancunian, a construction worker who got into showbiz through singing in clubs. Jack himself was a man of simple tastes, never happier than when tending to the pigeons his long-suffering wife Vera detested, having a flutter on the horses or propping up the bar of the Rovers' Return with a pint of Newton and Ridley's best bitter and one of Betty's hotpots.

The character changed over the years from a womanising, petty thieving "lovable rogue" to a moral compass for the community, under the guidance of his unlikely godfather Ken Barlow.

Newton and Ridley, the brewery that owns the Rovers' Return, was apparently based on Groves and Whitnalls Brewery in Salford and the pub itself on one of the same name on Shudehill, Manchester. 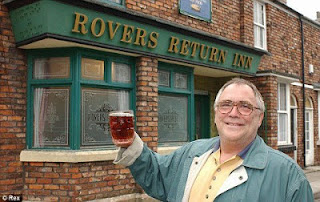