Lighting up the Dark Ages

A new series about art in the so-called Dark Ages, the period of Late Antiquity following the collapse of the Roman Empire in the West, started on BBC4 last night.

Art crtic Waldemar Januszczak began by looking at Christian art in the early fourth century, when Christianity was still a persecuted sect whose adherents gathered secretly in catacombs (within a couple of decades, it would become the official State religion of the Roman Empire and begin its rise to power as the Catholic Church).

Januszczak is a witty and engaging presenter. I enjoyed his explanation of the Latin Rotas square, a secret Christian code that I hadn't heard of before, unlike the  well-known Greek chi rho (XP) and Ichthys (fish) symbols which he also discusssed. His look around the Basilica of San Vitale in Ravenna with its stunning Byzantine mosaics was the highlight of the programme for me though.

The rest of the series will counter the myth that the peoples who migrated into the collapsing Roman Empire in the fifth and sixth centuries were uncultured barbarians and that the Dark Ages represent a step backwards for European culture. 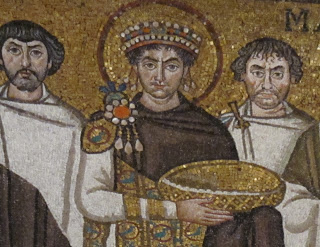