I suppose it had to happen. AFC Wimbledon will play MK Dons in the next round of the FA Cup.

AFC are the club set up by fans in 2002 when Wimbledon FC moved to Milton Keynes. The boycott of what was dubbed "Franchise FC" continued until 2007 when MK Dons gave up their claim to Wimbledon's historical record, including winning the FA Cup in 1988. AFC Wimbledon also helped Manchester United fans set up FC United, a similar community-run club, after the Glazer takeover at Old Trafford in 2005.

While clubs moving cities is almost unknown here, in North America lots of NFL and Major League Baseball "franchises" have relocated thousands of miles away, in some cases more than once. Like the people who run the Premier League, the owners of US sports teams are more interested in TV viewers than the fans who go to games. You might think this means that US sports teams are less rooted in their communities but that isn't always the case. When the owner of the Cleveland Browns NFL team relocated the "franchise" to Baltimore in 1995, fans succesfully fought for a new team in the city that retained the original team's colours and historical record. And I still remember on my first trip to New York in 2002 talking to baseball fans about the bitterness in the city after the New York Giants and Brooklyn Dodgers left for the West Coast in the late 50's. Like MK Dons, the Los Angeles Dodgers and San Francisco Giants should be seen as new clubs. The storied legacies of the New York Giants and the Brooklyn Dodgers - the team that broke baseball's colour bar by signing Jackie Robinson in 1947 - belong not to them but to the New York Mets, the team that replaced them in the National League in 1962 and deliberately combined their colours. 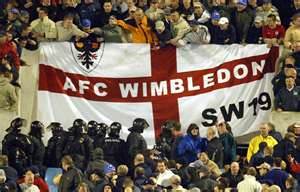