A new album of unreleased material by Jimi Hendrix is coming out next year. According to the  Hendrix website, the tracks, recorded in 1968 and 1969, show "new, experimental directions" and "fresh diversions from his legendary guitar work".

Hendrix's music is clearly rooted in the blues. You could describe it as psychedelic blues, blues on a LSD trip to Mars and back.  Buddy Guy in his autobiography tells the story of Hendrix turning up at one of his gigs and asking if he could record it on his tape-to-tape machine. I've also seen an interview with Guy where he demonstrates how Hendrix's Voodoo Chile is based on a Muddy Waters lick.

Hendrix would have been the first to acknowledge his blues influences. According to people who knew him in New York in the mid-60's, he played Muddy Waters records pretty much continuously in his apartment. At the end of his life, he experimented with acoustic blues as well as playing with R&B musicians in the Band of Gypsys. I wonder where Jimi would be now musically if it hadn't died so prematurely in 1970. 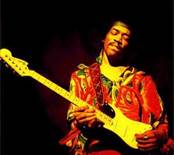