I listened to a radio programme yesterday about the American folk singer Jackson C. Frank.

I must admit I hadn't heard of Frank before, although I had heard the cover of his song Blues Run the Game by Simon and Garfunkel. Along with other Americans in the 50's and 60's, many of them escaping the McCarthyite witch hunt or the draft, Frank headed to London and joined its burgeoning folk scene after being awarded compensation for injuries he received as a child in a fire at school.

His subsequent fate, homeless and beset by mental illness, has echoes of that of the blues guitarist Peter Green, except that it took Frank's untimely death to propel his work back into public consciousness. 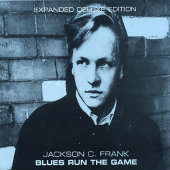