I picked up a slim book the other day that includes the original 1845 and 1871 rules of rugby.

A nineteenth century fan of rugby football would recognise most of the play in the modern games of rugby league and rugby union. As the introduction points out, rule 18 from 1871, "any player holding or running with the ball being tackled and the ball being fairly held he must at once cry down and there put it down" is very close to the play-the-ball rule in rugby league.

The football game played at Rugby School in the 1840's is the forerunner not just of rugby league and rugby union but American football too. A modern NFL fan would have no problem understanding rule 43: "A player who has made and claimed a fair catch shall thereupon either take a drop kick or a punt or place the ball for a place kick." 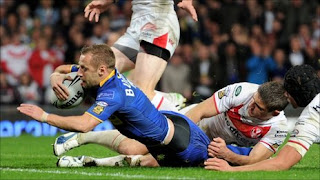