Today is the hundred and twenty-fifth anniversary of the birth of the artist L.S. Lowry.

People sometimes think that because Lowry painted scenes of working-class and industrial Salford, he must have been left-wing. In fact, he was a lower middle-class Tory whose knowledge of the area was gained collecting rents there. As he said himself:

"At first I detested it, and then, after years I got pretty interested in it, then obsessed by it...One day I missed a train from Pendlebury - a place I had ignored for seven years — and as I left the station I saw the Acme Spinning Company's mill ... The huge black framework of rows of yellow-lit windows standing up against the sad, damp charged afternoon sky. The mill was turning out... I watched this scene — which I'd looked at many times without seeing — with rapture..."

There's a bit of a disdainful attitude to Lowry in the art world - the critic Brian Sewell once did a snobby but quite funny deconstruction of his paintings on TV with the Salford artist Harold Riley defending his mentor.

I quite like Lowry's paintings myself. I first saw them at Salford Art Gallery and then at the Lowry Centre where the collection is now displayed.  They may not be up there with the Italian Renaissance but there's something about the angles and symmetry of the buildings and the famous matchstalk figures have a wistfulness about them. It also helps I suppose that I'm familiar with quite a few of the places Lowry painted in Manchester, Salford and Stockport and that I associate him with the 1978 number one song Matchstalk Men and Matchstalk Cats and Dogs by local duo Brian and Michael. 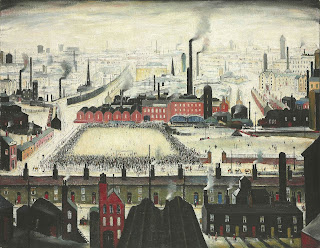