I've spent a fair bit of time in Sam Smith's pubs of late, mainly Stockport and South Manchester CAMRA's Pub of the Year, the Blue Bell in Levenshulme.

Sam's Smiths draught beers are famously cheap - around the £2 mark in the North and only a pound or so more in London - but at £4 and upwards their bottled beers, at least in their pubs, aren't.

Just as Tadcaster's most traditionalist, some would say idiosyncratic, brewery only brews one cask-conditioned draught beer, Old Brewery Bitter, only one of their bottled beers is bottle-conditioned, the 8% abv strong ale Yorkshire Stingo, and while I've drunk most of their bottled range - especially their pale ales and stouts - I've never tried this one before.

Although Yorkshire Stingo sells for around £9 a bottle in pubs, I managed to pick one up online as part of a mixed box of 12 Sam Smith's beers for £34.95 from the Real Ale Store. It's a reddish beer with an alcoholic aroma which hits you straight away and reminded me of XX Strong Ale which Fuller's produced as part of their Past Masters series a few years ago.

I watched a few online reviews of Yorkshire Stingo before drinking it, including this one which, despite the guy speaking - I think - Polish, you still sort of get what he's saying. 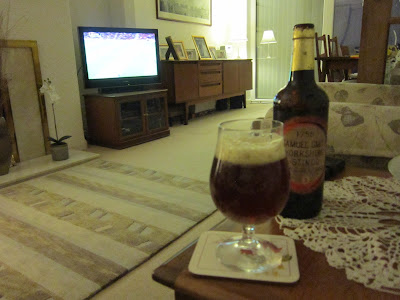