Last weekend's draw for the FA Cup semi-finals which saw Manchester United picked to play Tottenham Hotspur in the last four of the competiton has produced an anomaly, and not a little controversy.

Even though Spurs are officially the away team, they will in fact be playing at their current home ground, Wembley, the stadium used for semi-finals since 2008 and by them this season whilst their White Hart Lane home is being remodelled and expanded.

This situation wouldn't have arisen of course had the Football Association not devalued the competition by playing semi-finals at Wembley rather than at a large neutral club ground roughly equidistant between the two teams, such as Villa Park, which is what happened before the switch to the newly-opened national stadium a decade ago, but is of a piece with the other money-making schemes they have introduced: sponsorship of the competition by corporate bodies, executive seat packages which include all events at the stadium across a number of years, the moving of matches from three o'clock to early evening to maximise profits from global TV deals, with the travelling supporter low down on their priority list, all supposedly justified by the cost of construction, just as the later kick-off time is supposedly more "family friendly" (by not interrupting Saturday afternoon shopping) and finals on the same day as League matches, rather than later in May when the season had finished, were supposedly to help England prepare better for international tournaments, hence their stellar performances at them since 2008.

I know that in international and European club competitions, teams have played finals at their own home grounds, and that England won the World Cup at theirs, the old Wembley, in 1966, just as West Germany, Argentina and France have at theirs since then, but that is pretty much unavoidable when the tournament venue has been picked years in advance and the teams have travelled thousands of miles to play there, but apart from money there is no reason why Spurs should be handed home advantage rather than the tie being played at a neutral ground. 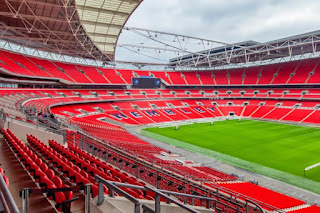