The Rugby Football League, the governing body of rugby league in England, has announced that it is relocating its headquarters from Leeds to Manchester.

By the start of the 2021 World Cup, the RFL will base itself at the Etihad Campus in east Manchester, the sporting complex which already includes national cycling and squash venues, an athletics track and the two stadia where Manchester City's first, youth and women's teams play their home matches, where the England rugby league team will also train ahead of international fixtures.

Manchester being pretty much equidistant between the sport's two main heartlands, southwest Lancashire and west Yorkshire, with road and rail links between them going through the city, was the reason why the Magic Weekend, the annual event where a round of Super League matches is played across two days at the same stadium, was held here from 2012 to 2014, before moving up to Newcastle's St. James' Park when Manchester City began expanding their ground, towards a projected final capacity of 61,000. I can now see that event taking place here permanently, as well as perhaps the Super League Grand Final now played at Old Trafford (although the showpiece Challenge Cup Final is unlikely to head North again from Wembley, its home since the late 1920's), and international and World Club Challenge matches too.

Although they are unlikely to relocate permanently outside the boundaries of their city, I'd also like to see Salford rugby league club play a few matches at the 7,000 capacity Academy Stadium there (pre-season friendlies to start with, say), both because of the much better public transport services to it compared to those to their home ground at Barton-upon-Irwell (itself outside the historic boundaries of Salford) and as part of the wider missionaty effort to extend the appeal of the game beyond its traditional heartlands. 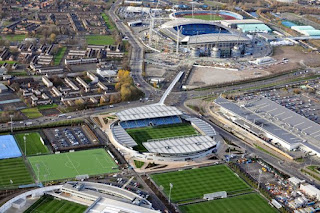