Brewing at the White House

The US presidential election has taken another twist with news that Barack Obama is brewing at the White House. The president's chefs have brewed a brown ale, a blond ale and a porter with honey from the White House's beehives.

There's been speculation as to whether this is the first beer ever brewed in the White House. Although Thomas Jefferson is known to have been a homebrewer, there are no records of him brewing in the White House itself.

Even though Prohibition ended in 1933, the ban on hombrewing wasn't repealed until 1978 when Obama's Democratic predecessor Jimmy Carter approved legislation allowing beer to be made at home.

So Americans, who's it to be in November? Teetotaller Mitt or brewer Barack? 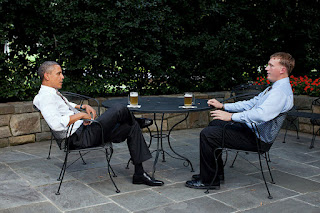