The day dawned warm and sunny on my first morning in Bamberg.

After a short stroll along the Regnitz, a brief attempt to climb Michaelsberg (quickly abandoned when I realised the steepness of the hill), a look round Bamberg Cathedral and jostling my way through the tour parties to take the obligatory photo of the Altes Rathaus, I'd worked up quite a thirst. With the clocks striking noon, it was time to head to Schlenkerla.

Schlenkerla is Bamberg's best known pub and its Aecht Schlenkerla Rauchbier Märzen is often held up as the classic example of the style.  I've drunk and enjoyed it in bottles before but this was the first time I'd drunk the draught beer. I'd been looking forward to it and wasn't disappointed.

The first swig is like the smokiest bacon you've ever eaten. I can't quite get my head round why lots of people don't like it but then smoky bacon has always been my favourite flavour of crisps. I think it's something psychological about the smell of burning wood.

Given it dates from the 1300's, it's no surprise that Schlenkerla has one of the most historic atmospheres of the pubs in Bamberg, although it's obviously been knocked about - and indeed through - a bit in that time. The tap room where I sat has the classic combination of wooden barrel on the bar, a low roof and dark timber.

I first saw Schlenkerla when Michael Jackson filmed there for his TV series Beer Hunter in the 1980's. As he said, the claim that you need to drink six or seven glasses of Rauchbier before you'll enjoy the taste is just a canny country way of getting you to drink more. Now I just need to get my head around Schlenkerla Rauchweizen, their smoked wheat beer. 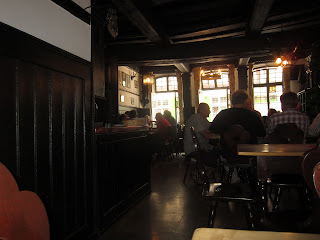 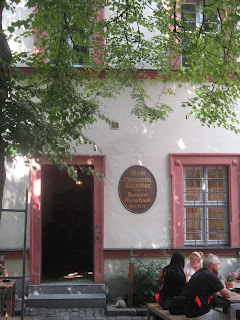