Forchheim is a small, pretty mediaeval town between Bamberg and Nuremberg. I'd planned to spend a couple of hours there before heading back to Bamberg. It didn't quite work out like that.

Having looked at a map beforehand, I was pleasantly surprised at how straightforward and relatively short the walk from Forchheim station to the Altstadt is. I only had to stop once to check in my best schoolboy German that I was going the right way.

Forchheim is a bit like Bamberg, but on a smaller scale: half-timbered buildings, fast-flowing river, mediaeval town hall and four brewery taps, a couple of them next to each on Sattlertorstrasse. Being another hot day, I was mopping the sweat from my brow and in need of refreshment by the time I got to Brauerei Hebendanz. 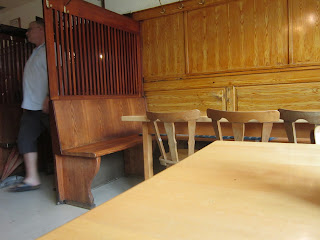 The inside of Hebendanz is more modern than the exterior suggests but I quite like the pine look. I'm not sure which Hebendanz beer I drank: as soon as I'd seated myself in the tap room, the landlord called over "Ein Bier?" and I was more concerned to get a drink than to ask questions. It was pale, from a keg, low in carbonation and fairly hoppy. It was also the first beer I've drunk out of a Steinkrug and it did what it's supposed to, keep the beer cool. Much as I like Smokey Robinson, the Tempations and Four Tops, a Motown compilation tape playing in a Franconian pub was a bit surreal though.

Refreshed and stopping only to take a photo of the Rathaus, I headed back to the station. This is where things started to go wrong. To be fair to Deutsche Bahn, it wasn't actually their fault. A burning gas canister on a building site near Eggolsheim had closed the motorway and railway line to Bamberg. Soon the handful of people on Forchheim station on a weekday afternoon was joined by another hundred or so as the high-speed ICE train between Nuremberg and Würzburg came to an unexpected halt there. No wonder the woman in the information kiosk locked the door and put up the closed sign.

After a mere two and a half hours in the sweltering heat outside Forchheim station, a rail replacement bus turned up to take the sweaty throng to Hirschaid where a train to Bamberg was waiting for us. The staff at Forchheim station clearly don't have the experience the ones at Manchester Piccadilly do in organising a replacement service when things go wrong.

By the time I'd got back to my hotel in Bamberg and after a much-needed shower, it was time to go to the pub for the evening. On the upside though, the coach trip from Forchheim to Hirschaid had been through some very pretty Franconian villages and countryside that I wouldn't otherwise have seen. 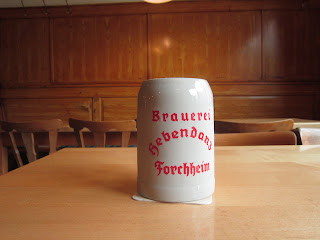 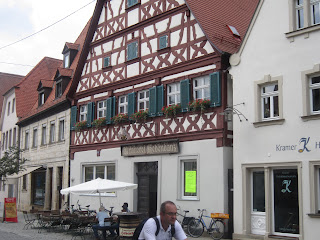 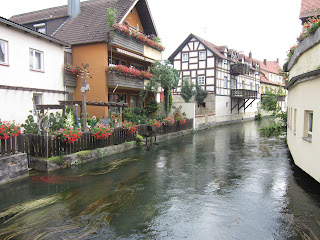