People who know me will tell you that I like to arrive early, whether for planes, trains or events. Sometimes, if there are delays en route, this means I arrive bang on time; most of the time though, it means hanging around at airports and train stations or in pubs.

Flying from Manchester to Nuremberg last week, I had three and a half hours between planes in Düsseldorf. Just enough time then for a quick trip to the Alstadt. On the plane, I had been mentally working out how long it would take between landing and sitting in Zum Uerige with a glass of Alt in front of me. I knew that the train journey from the airport to the Hauptbahnhof is about fifteen minutes and that from there it's only a couple of stops on the U-Bahn to Heinrich Heine Allee. The answer in the end was forty-two minutes.

Zum Uerige is probably my favourite pub in Düsseldorf. The beer is as good as my other favourite Alt, Füchschen, and the service is the standard Rhineland method of filling up a tray of small glasses by gravity from a wooden barrel and then going round the pub depositing them on customers' beer mats and adding a pencil mark. What sets Zum Uerige apart is the ambience, especially in the cosy tap room where I sat. I also like the standing drinking corridor where they chalk your beers up on the wall and the fact that the Rhine is at the end of the street.

After a few glasses of Uerige Alt, it was time to head back to the airport for the flight to Nuremberg I'd already checked in for, cutting it fine for me by arriving only an hour before the gate opened. 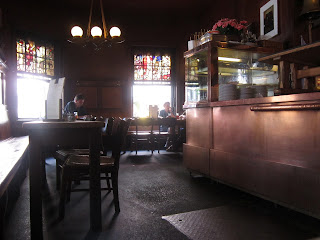