The first series I saw presented by Wood was In Search of the Trojan War in the mid-80's. Since then, I've watched his Conquistadors and the superb In the Footsteps of Alexander the Great that inspired me to read the accounts of his exploits by Greek historians. He has an enthusiastic style of presenting that is very engaging and his approach to English history in the current series suggests that his politics are to the left. Many women also seem to find him quite attractive.

Wood is from Manchester and attended Benchill Primary School (where my grandmother later worked on school dinners) before winning a scholarship to the then direct grant Manchester Grammar School and subsequently a place at Oxford. In a BBC4 programme about grammar schools in the 50's, Wood told how at Manchester Grammar School he wrote a reply to a Sunday Times piece by Field Marshal Montgomery about the Norman Conquest sticking up for the Anglo-Saxons which his teacher - despite being pro-Norman - sent off to the newspaper who published it. He was subsequently invited to visit the Houses of Parliament where he met Lord Attlee, the first time he'd been to London apart from a Manchester United away match with his dad.

To his credit, Wood said that despite being a beneficiary of it he always realised how divisive selective education was and is opposed to it being reintroduced. 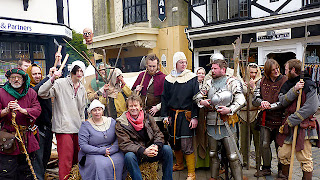