Carrying a torch for the Olympic flame

The Olympic flame was in the North West again this weekend, passing through Manchester, Salford and Stockport.

A lot of the things that are wrong with the Olympics - corporate control, social cleansing, restrictions on protest - also apply to the torch relay but there's one criticism I find it hard to get my head round. I've heard people argue that as the Olympic torch relay was invented by the Nazis for the 1936 Berlin Olympics it should therefore be boycotted. The Nazis also invented the Volkswagen, the autobahn and the ballistic missile technology that led to the Apollo programme but not many people refuse to travel down the motorway in a Golf or deny the Moon landing is one of humanity's greatest achievements.

I was thinking of going to see the torch in Manchester on Saturday afternoon but being June it was lashing down outside and one of my favourite actors, Rod Steiger, was losing the Battle of Waterloo to Wellington again as Napoleon on BBC2. I could also have gone to Stockport on Sunday morning but that would have meant getting up ridiculously early even by my early rising standards. 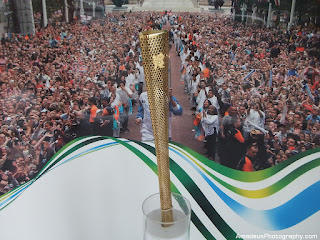