Back to O Levels?

The Education Secretary Michael Gove is apparently about to scrap GCSE's and go back to a two-tier exam system, O Levels and CSE's in all but name.

I took my O Levels in 1987, the last year they were sat. Whenever someone says that GCSE's are too easy, I think, "Yes, they are easier than O Levels but O Levels were too hard."  The point about O Levels is that they were designed so that most kids failed them. Their only real use was identifying people who would do the subject to A Level.  That's why raving lefty Kenneth Baker replaced them with GCSE's in 1988.

The other point about O Levels and CSE's is that a two-tier exam system ends up with at least two tiers in schools. I went to a comprehensive which set us at the end of the third year into two O Level and two CSE sets. The top two sets might as well have been at a grammar school and the bottom two at a secondary modern. Almost inevitably, teachers were assigned accordingly so that in the English, history and foreign language top sets I ended up with some outstanding teachers and in the Maths and Science bottom sets lazy and incompetent ones.

A really radical step in education would be to abolish exams altogether. 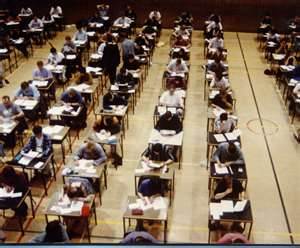