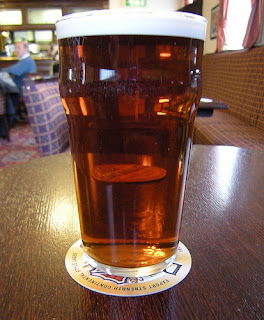 The Oldham Evening Chronicle reports on yet another episode in the seemingly endless discussion on how much head there should be on a pint of beer.

The size of the head on a pint is not something that's really bothered me.  If there's too much, you can ask for a top up.  I even think that in principle you should be able to ask for a sparkler to be removed, although being a fan of this distinctly Northern style of dispense I never would myself. And of course a properly conditioned pint of cask beer will have a head even without a sparkler being used to serve it.

The obvious answer would be to introduce lined glasses with room for a head above the pint line.  But I'm not that bothered that I think pubs should be forced to use them. I would much rather have a proper head and a bit less liquid than a pint of liquid and no head.
Posted by Matt at 05:53