The ties that bind

It seems that the tie is in irreversible decline.  Martin Roth, the new German head of the Victoria and Albert Museum in London, has said that he is shocked by how few English men now wear one.

The interesting thing when a BBC reporter did a vox pop of men wearing ties was that without exception they all said they that didn't enjoy wearing them and took them off as soon as they could.

Although I've been associated in the public mind with ties, I wouldn't be so bold as to claim credit for a shift in social trends that has been going on for decades.  Looking at old photos of my relatives - engineering workers from Manchester and miners from Wigan - sporting ties on the beach at Blackpool, it's clear that wearing a tie even on holiday is one of the many things that were thankfully cast aside in the 1960's. 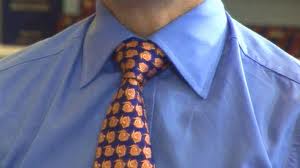