I'm glad that the Chinese and South Korean badminton players who tried to lose because they'd already qualified for the quarter-finals and wanted an easier draw have been thrown out of the Olympics. The organisers of the London Games should also refund the tickets of the spectators who had to witness it.

The incident reminded me of the one-day cricket match in the late 70's between Somerset and Worcestershire when Somerset declared on 1 for no wicket in order to lose by a lesser margin than Glamorgan and thus qualify for the next round of the competition. The Test and County Cricket Board rightly expelled them for having breached the spirit if not the laws of the game.

I've heard some people compare what happened in the Olympic badminton with football clubs putting out weakened teams in Cup competitions or athletes not giving it their all in heats because they want to save their energy for the final. I think the difference is that at least there spectators get to see what they've paid for. The Chinese and South Korean badminton players might like to think about on the plane back home, although the South Korean coach's retort that "The Chinese started this. They did it first." doesn't give you any hope that they actually will. 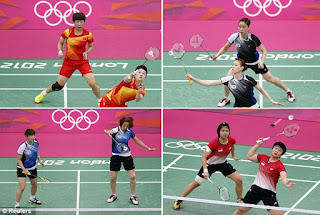