This week's edition of Radio 4's Food Programme was an extended interview with beer writer and longtime CAMRA staff member Roger Protz. The programme also included an excerpt from an episode in 1998 in which Roger compared the "Burton snatch" sulphur aroma in Marstons Pedigree and Draught Bass and concluded that it was more pronounced in the latter. Having drunk a fair amount of both as a student in Stoke in the early 90's, I'd have said it was the opposite.

Roger told the interviewer a few things I hadn't heard before - that he got the CAMRA job in 1976 because he'd worked on the Evening Standard as had founder member Michael Hardman, that Fuller's had decided to stop brewing cask beer before CAMRA persuaded them to continue - and made some general observations about British beer that didn't really stand up to scrutiny, such as local hops being fresher than foreign ones (goodbye golden ales with all those American hops!) and a long secondary fermentation in the pub cellar being one of the defining features of cask beer, something that I'm sure we'd all welcome but which probably doesn't happen to the extent we might like to think it does.

He made some other claims which ranged from clearly untrue ("When I was a teenager in the 50's, the legal drinking age in pubs was 21": it was actually 18, as it is now, having been raised from 14 in 1923) to somewhat doubtful: did keg beer really take off in the 60's as an alternative to poor quality cask beer because lots of experienced publicans who knew how to look after a cellar had been killed in the war? He also took the opportunity to take some swipes at big breweries, including A-B InBev for cutting the lagering time for Stella Artois, SAB Miller for computerising the brewing process at one of their Eastern European plants (although at least one of the family-owned regional independents rightly championed by CAMRA has also done this), and Scottish "craft punks" BrewDog for slating him personally and CAMRA as an organisation in its PR. I was amused by the interviewer, in the the true spirit of BBC impartiality, then intoning that all these breweries had been contacted for a response but had declined to comment.

Protz, then a member of the Socialist Labour League, edited the Young Socialists' paper Keep Left in the early 60's, before moving on to the same job on Militant in the mid-60's and Socialist Worker in the late 60's. He left IS, the organisation which later became the SWP, in 1974, and said that when he bumps into former comrades from the far left and they question him about having spent his life writing about and campaigning for cask beer, he tells them that he has had a much bigger impact on British society than they have.

The programme was a handy introduction to the history of CAMRA and cask beer for younger listeners who hadn't heard it all before. Protz also got a plug in for the Revitalisation Project and rightly paid tribute to the pioneering work of Michael Jackson whose travels around Europe opened his eyes, and mine, to the good beer to be had beyond our shores. 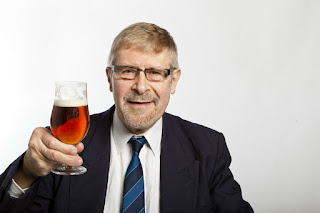