Channel 4's Dispatches programme last night investigated the policy of Kim Jong Un's rigidly Stalinist regime in North Korea of exporting what are effectively slave labourers to others parts of Asia and Europe.

The reporter, Morland Sanders, travelled to the Polish countryside where he found North Koreans in huge greenhouses picking tomatoes for export. Although they didn't seem to have minders with them, their relatives have to stop behind in North Korea, effectively as hostages in case they escape. The workers are forced to do large amounts of overtime and only receive about a tenth of their wages, the rest being paid directly to the North Korean regime. Sanders tried to speak to some of them with a South Korean interpreter at a bus stop near the farm, but, understandably, they all ignored him, as did their compatriots building a luxury apartment complex in Warsaw. He then went to a clothing factory in Malta which apparently also uses North Koreans as forced labour.

It's estimated that the North Korean regime earns around £1 billion a year from the companies who exploit the forced labour of the citizens whom it ships overseas, money which helps to shore up its rule and fund a nuclear weapons programme. It's something I'd not heard of before, and a reminder, if one were needed, that's there's nothing even vaguely socialist or pro-working-class about North Korea's hereditary dictatorship. 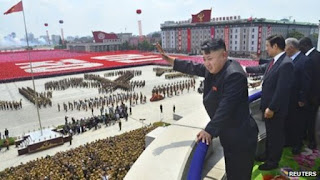